CHARLES DICKENS & THE ART OF A CHRISTMAS CAROL

CHRISTMAS AT THE ART MUSEUM

I walked about the black streets of London, fifteen and twenty miles, many a night when all the sober folks had gone to bed.

In October, 1843, 31 year old Charles Dickens was in the preliminary stages of creating what he would eventually title A Christmas Carol in Prose: Being a Ghost Story of Christmas. As the British author confided to a friend in the quote above, he was so absorbed in developing the plot and characters that he could barely sleep.  During the next few months, Dickens would continue to be consumed not only in writing A Christmas Carol, but its publication as well, resulting in a perennial masterpiece that has never gone out of print.

In this pre-holiday blog, I’ve assembled a mini-gallery of illustrations by JohnLeech (1817-1864) from the initial edition, along with excerpts from the book’s narrative. First, though, here are some fast facts on Dickens’s literary mission.

Pressing Deadline: Finished in 6 week marathon session in late November less than a month before Christmas; simultaneously working on installments for the novel Martin Chuzzlewit which was currently available in serial form to the public.

Motivating Factors: Debts he owed (complicated by pregnant wife expecting their fifth child) as well as a need to prove again his popularity as a writer, after experiencing declining sales. Also a vehicle for social reform by focusing on poverty of Cratchit family and the illness of the son Tiny Tim.

An Enterprise in Self Publishing:  Dickens paid for production plus oversaw design, choice of illustrator, and promotion because Chapman and Hall, who had published his best sellers The Pickwick Papers and Oliver Twist, were not enthusiastic about his Christmas idea. They would simply be the printers, ultimately deducting Dickens’s expenditures from the sales of A Christmas Carol.

Teenager Illustrator: 19 year old John Leech, already becoming known for his satirical contributions to Punch magazine, hired by Dickens who had been impressed by his work in the past.

In Love with Christmas: Dickens helped elevate the holiday, transforming it from a then low key event  to today’s festivities.  Coincided also with introduction of German Christmas tree and other traditions by Queen Victoria and husband Prince Albert.  He would seek to rival A Christmas Carol  with other volumes such as Chimes and A Cricket on the Hearth.

To view the original manuscript of A Christmas Carol, click:

Charles Dickens at 47, in a portrait done by William Powell Frith,16 years after he penned A Christmas Carol. 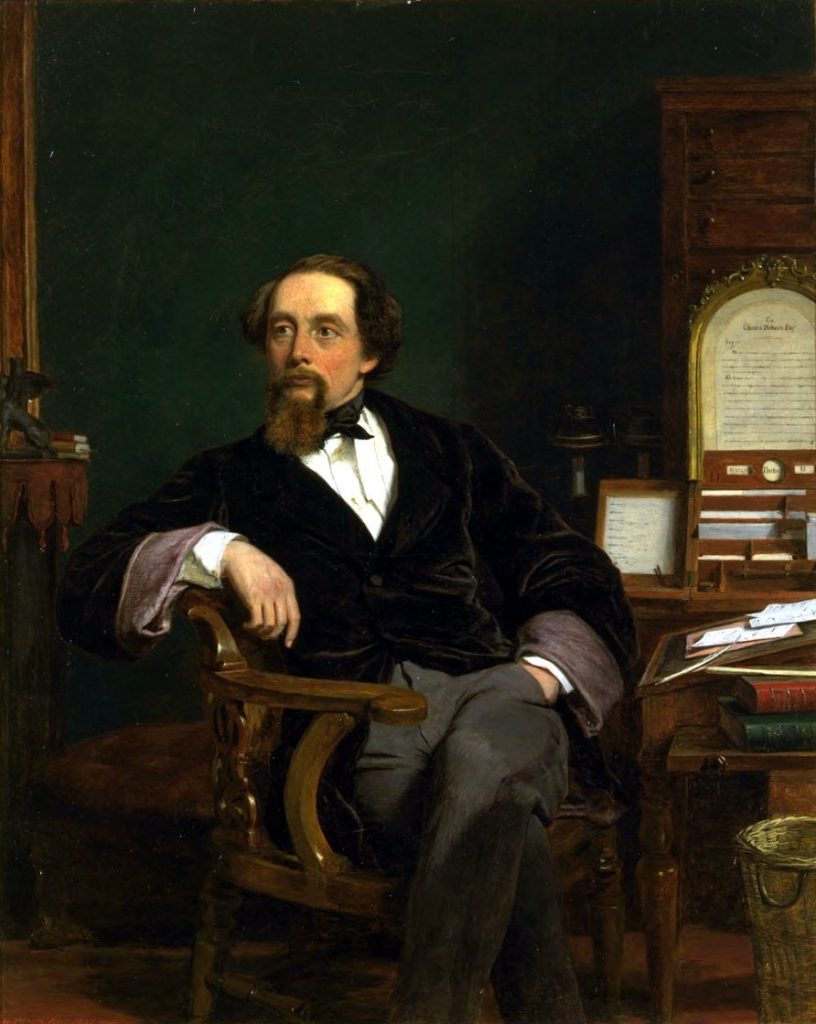 I have endeavored in this Ghostly little book, to raise the Ghost of an Idea, which shall not put my readers out of humour with themselves, with each other, with the season, or with me.  May it haunt their houses pleasantly, and no one wish to lay it. 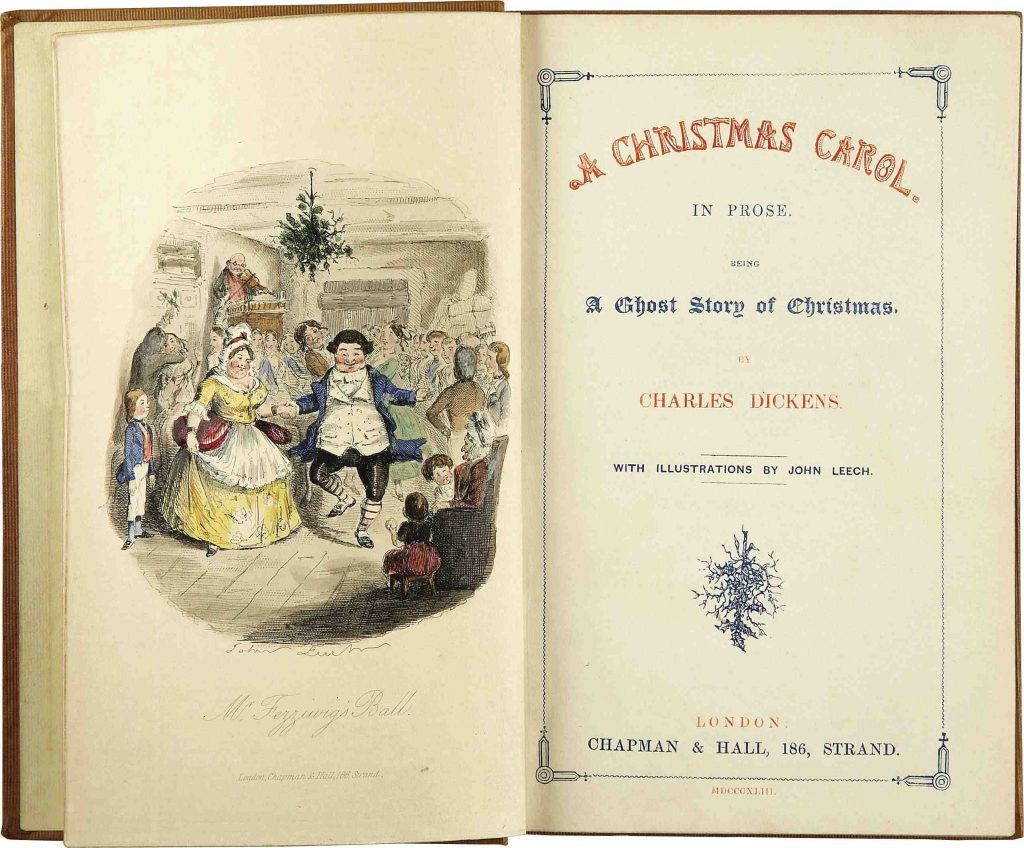 The chain he drew was clasped about his middle.  It was long, and wound about him like a tail; and it was made (for Scrooge observed it closely) of cash boxes, keys, padlocks, ledgers, deeds, and heavy purses wrought in steel.  His body was transparent; so that Scrooge observing him, and looking through his waistcoat, could see the two buttons on his coat behind.

“I am the Ghost of Christmas Present,” said the Spirit. “Look upon me!”

Scrooge reverently did so.  It was clothed in one simple green robe, or mantle, bordered with white fur. The garment hung so loosely on the figure, that its capacious breast was bare, as if disdaining to be warded or concealed by an artifice.  its feet, observable beneath the ample folds of the garment were also bare; and on its head it wore no other covering than a holly wreath, set here and there with shining icicles. Its dark brown curls were long and free; free as its genial face, its sparkling eye, its open hand, its cheery voice, its unconstrained demeanor, and its joyful air.  Girded round its middle was an antique scabbard; but no sword was in it, and the ancient sheath was eaten up with rust.

THE LAST OF THE SPIRITS

“Men’s courses will foreshadow certain ends, to which, if persevered in, they must lead,” said Scrooge. “But if the courses be departed from, the ends will change.  Say it is this with what you show me!”

The spirit was as immovable as ever.

Scrooge crept towards it, trembling as he went; and following the finger, read upon the stone of the neglected grave his own name, Ebenezer Scrooge.

“Am I that man who lay up on the bed?” he cried upon his knees.

The finger pointed from the grave to him, and back again.

The finger was still there.

John Leech, The Last of the Spirits, A Christmas Carol, 1843, First Edition

To explore Christmas with Charles Dickens and other artists, click:

The Victoria and Albert Museum

The excerpts form A Christmas Carol are from the Gutenberg Project internet version.

Among the sources for this blog are The Man Who Invented Christmas by Les Standiford, Crown Publishers, New York, 2008 and the website of the Pierpont Morgan Library and Museum, New York, New York

The above images are used solely for educational sources.

art and literature, Christmas in art, the holidays in art