Looking for images of cats in Western art on the internet was not as easy a process compared to dogs.  (See: Dogs in Art, July 7.)  In fact, on wikiarts, the ratio of dogs to cats was 2 to 1.  For example, cats were included in portraits with members of the ruling classes throughout the centuries, but not it seems with the same frequency as dogs.

However, during the nineteenth century, the artistic fortunes of felines began to rise.  Impressionist Renoir regularly used cats in his works, especially with women and children, while Theophile Steinlen’s Le Chat Noir or The Black Cat promoted the popular Parisian night spot of the same name.  Some painters, too, like Henriette Ronner-Knip (whom I just discovered through my research), was a cat specialist.

So here’s a visual snapshot of the eternal cat, beginning with late Renaissance artist Federico Barocci who lovingly sketched this drawing of a tiny kitten. 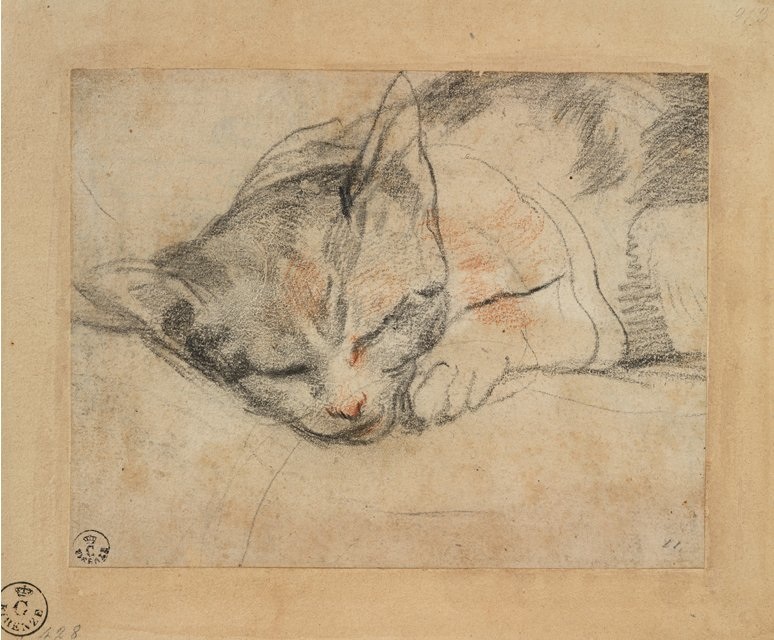 Although his predecessor Leonardo da Vinci, made a more systematic study of the cat in various stages of activity (morphing in one case into a dragon). 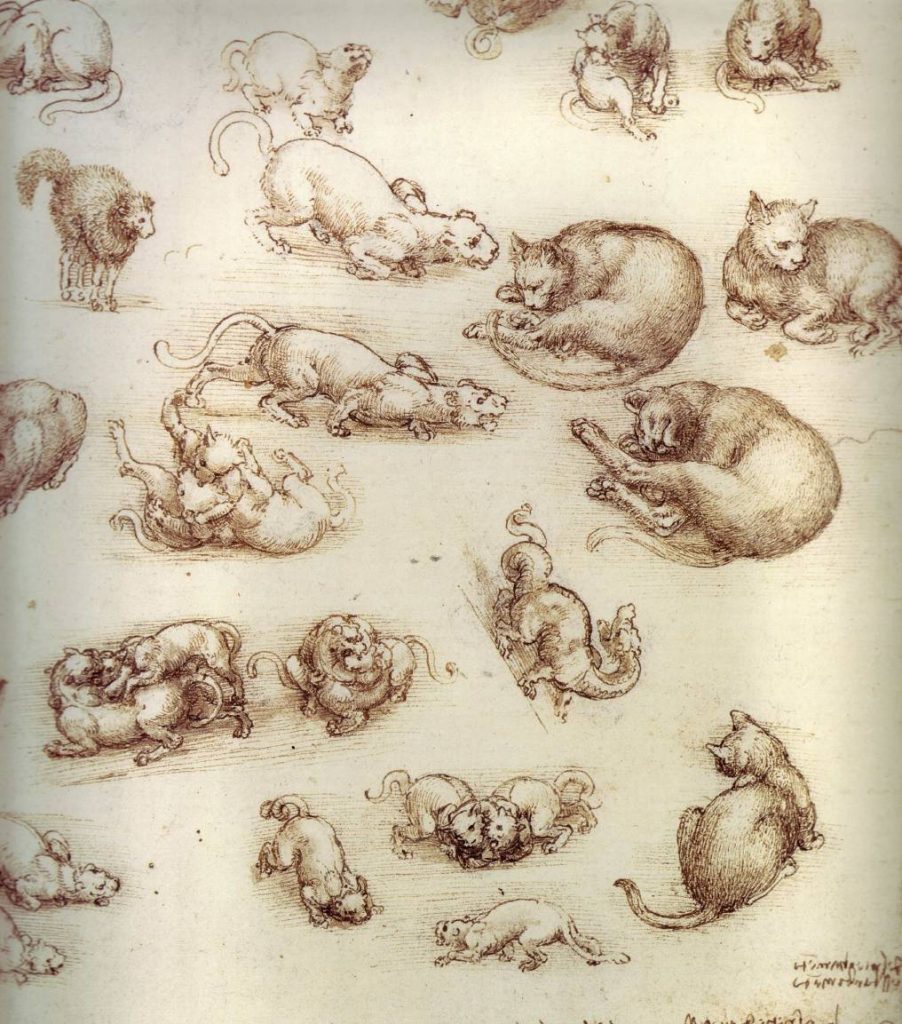 Yet, cats generally played a secondary role as companions sometimes, as in this Renaissance era portrait, the object of affection,

or in other cases, barely acknowledged by his or her mistress as in Young Lady Holding a Cat below. 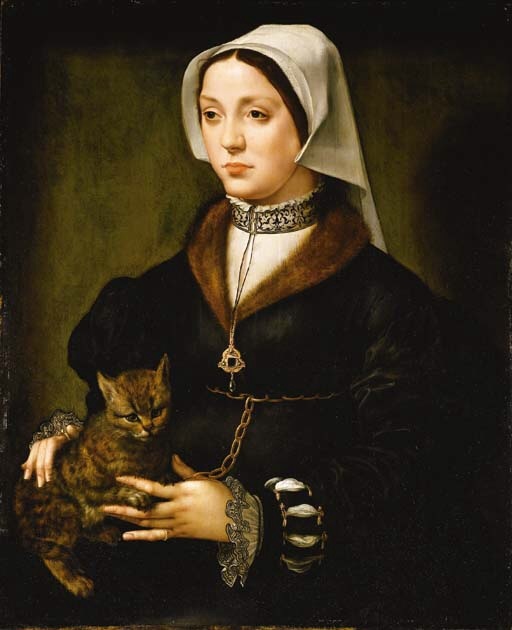 17th century Flemish painter David Teniers the Younger even satrized the cat in this comic concert, along with a menagerie of monkeys and a owl.

In the 1700s, cats continued to be depicted as playthings in works like Mademoiselle Huquier with her diminutive pet, peeking out from the lower corner.

Then, in 1896, Theophile Steinlen’s memorable poster advertising the Parisian cabaret Le Chat Noir (once frequented by Lautrec), made the cat a star.

Cats, too, were receiving attention in more intimate surroundings in works such as Renoir’s Sleeping Girl with a Cat, where the viewer is drawn equally to both subjects. 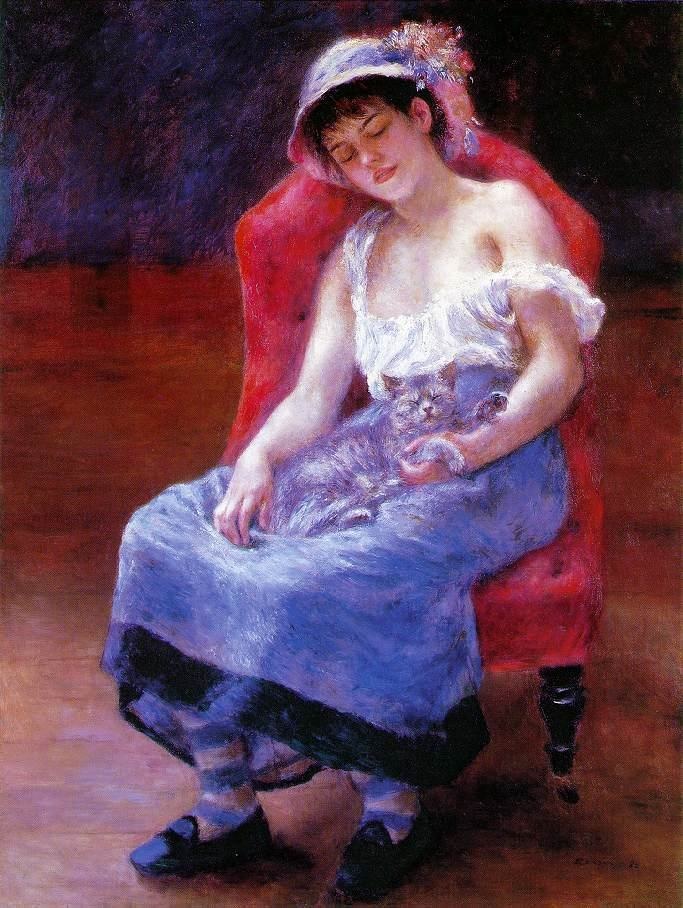 While Suzanne Valadon, who once modeled for Renoir herself, eliminates any human competition, focusing solely on her treasured cat. 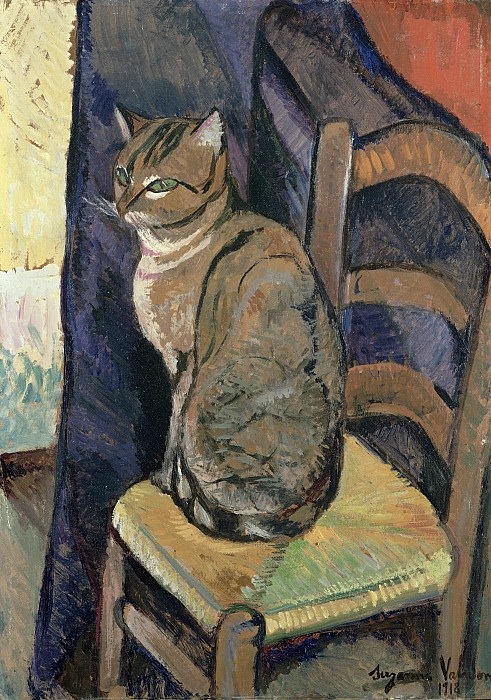 And American John Henry Dolph, also an artist with cat expertise, enables us to see a butterfly from a kitten’s perspective in another painting from the late 19th cenutry. 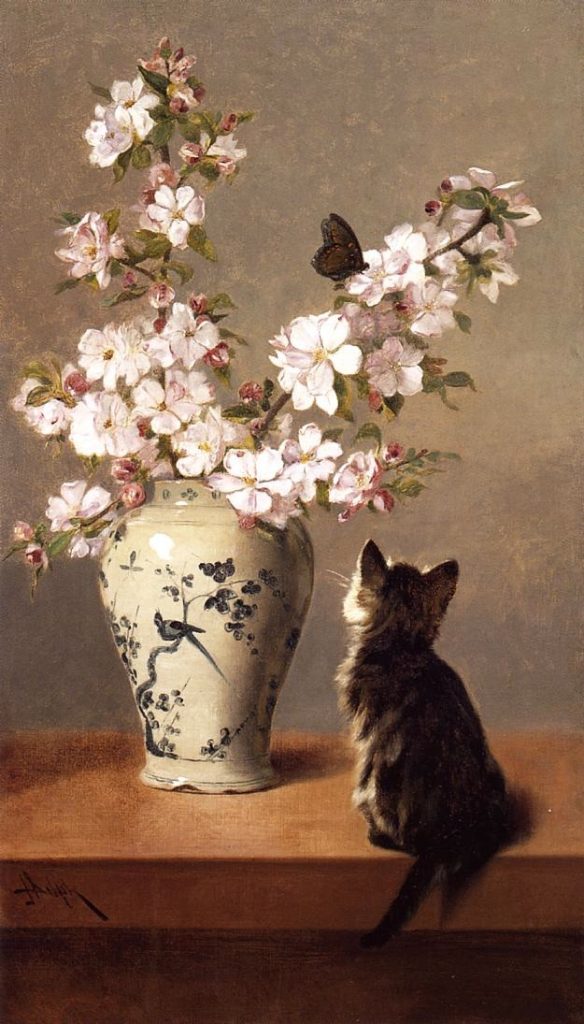 Finally with Henriette Ronner-Knip’s Cat, are we now truly hypnotized by the magnetic power of feline eyes? 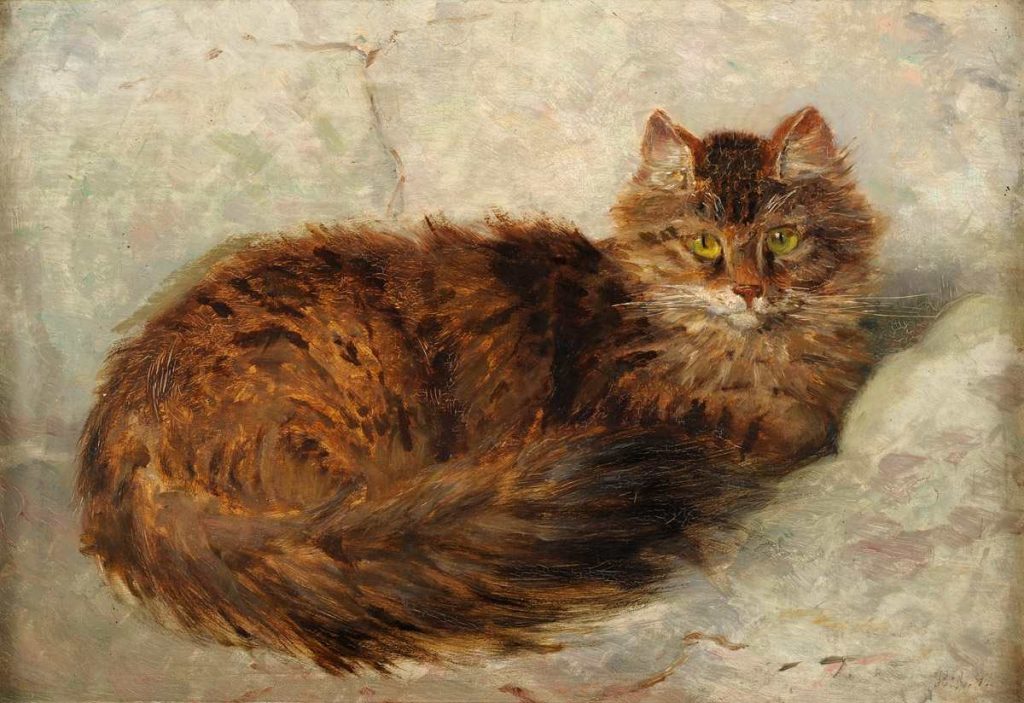 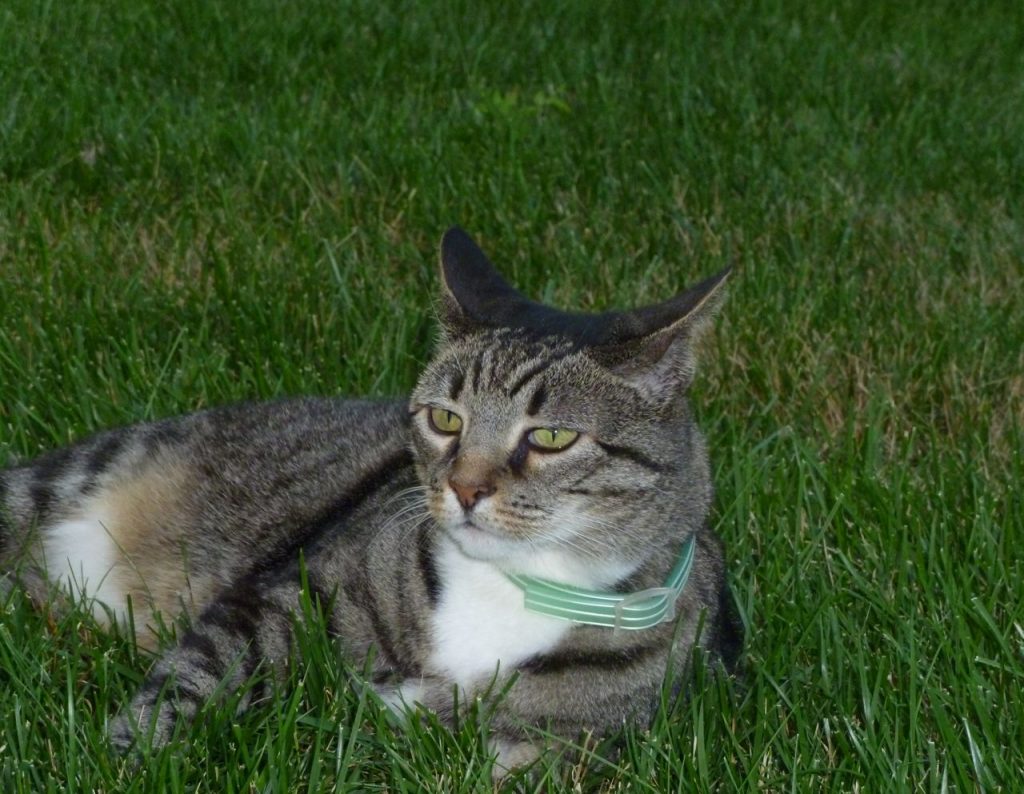 Federico Barocci (1526-1612). Said to be a student of Michelangelo, Barocci created religious works towards the end of the Renassiance.

Francesco Bacchiacca (1495-1557).  Florentine painter whose career spanned the Italian Renaissance; the Medici were his patrons.

Ambrosius Benson (c. 1495-1550).  Italian artist who moved to northern Europe and practiced the realistic style of  that area.

Jean-Baptiste Perronneau (1715-1783).  Popular French pastelist of the Rococo period in art; traveled beyond his country for many of his commissions.

Theophile-Alexandre Steinlen (1859-1923). Swiss born but primarily worked in Paris; his commercial posters (done in the medium of  lithography) still resonate with audiences today.

Pierre-Auguste Renoir (1841-1919).  One of the leaders of French Impressionism; internationally famed in 21st century.

Suzanne Valadon (1865-1938).  Originally circus performer and model, she learned her artistry from Edgar Degas and other Impressionists.  Mother of painter Utrillo and lover of Henri Toulouse-Lautrec.

John Henry Dolph (1835-1903).  American artist who was often based in New York City; his painting career centered primarily on interpretations of animals.

Henriette Ronner-Knip (1821-1909).  Dutch painter who was inspired by cats (and to a lesser extent dogs) and remembered for her insight into her favorite subject.