Click on the photograph to enlarge or enhance them.

GOTHIC SPLENDOR: CATHEDRAL ON THE MOUNT

(Note: My main blog for the week will now be on Wednesdays instead of Mondays.)

I’m beginning 2015 with a blog on cathedrals, one of the most magnificent architectural structures in the history of art and I plan to focus on this theme  throughout the year.  Today, I’m highlighting my personal impressions of the National Cathedral in Washington, D.C., just completed in 1990, unlike most of its predecessors that were primarily built in the Middle Ages. I’ve included some additional fast facts too at the end of the blog.

In all probability the Cathedral will not be built for a hundred years, as cathedrals build themselves slowly.

I used to live several blocks from the National Cathedral, watching its massive outline emerge in the distance every autumn as the trees slowly lost their leaves. Or hear its  bells sound in the neighborhood, especially on weekends or at the funeral of a national leader. I remember, too, the ceremony to commemorate the Cathedral’s completion on September 29, 1990, after 83 years of construction, spanning several presidencies from Teddy Roosevelt to George H.W. Bush.

The other day I returned on a cold December afternoon, when the west facade of limestone was bathed in luminous sunlight. 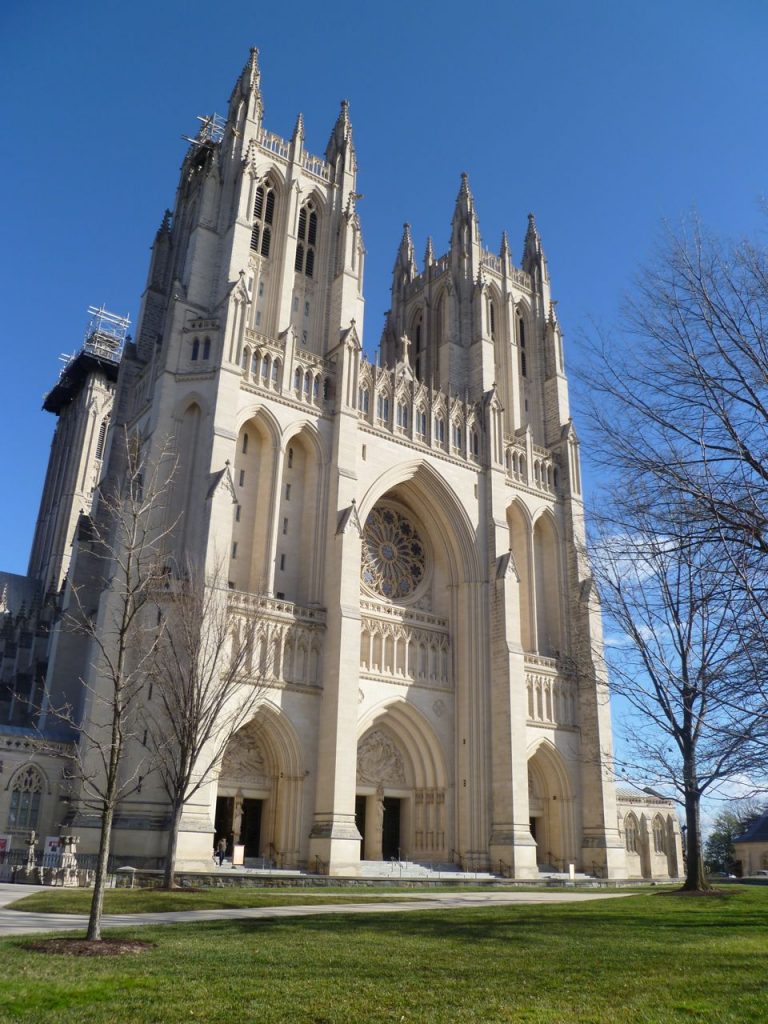 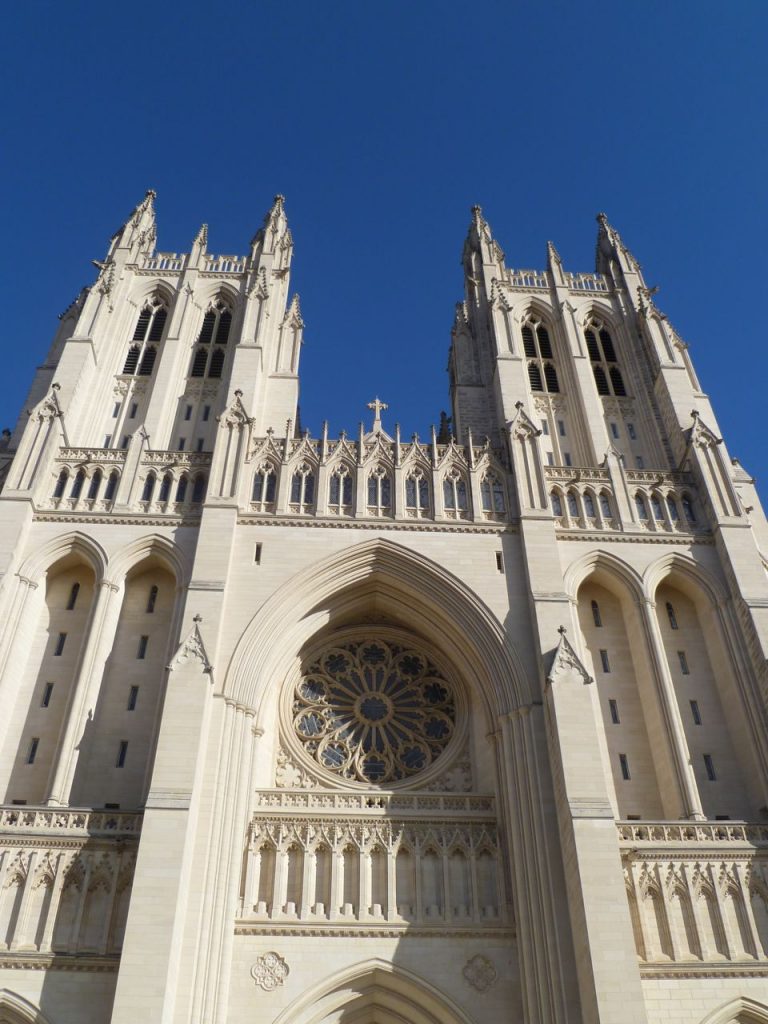 Rising 234 feet above me as I tried to photograph its ascent, suddenly buffeted by the natural wind tunnel of Mount St. Alban, the highest elevation in Washington. 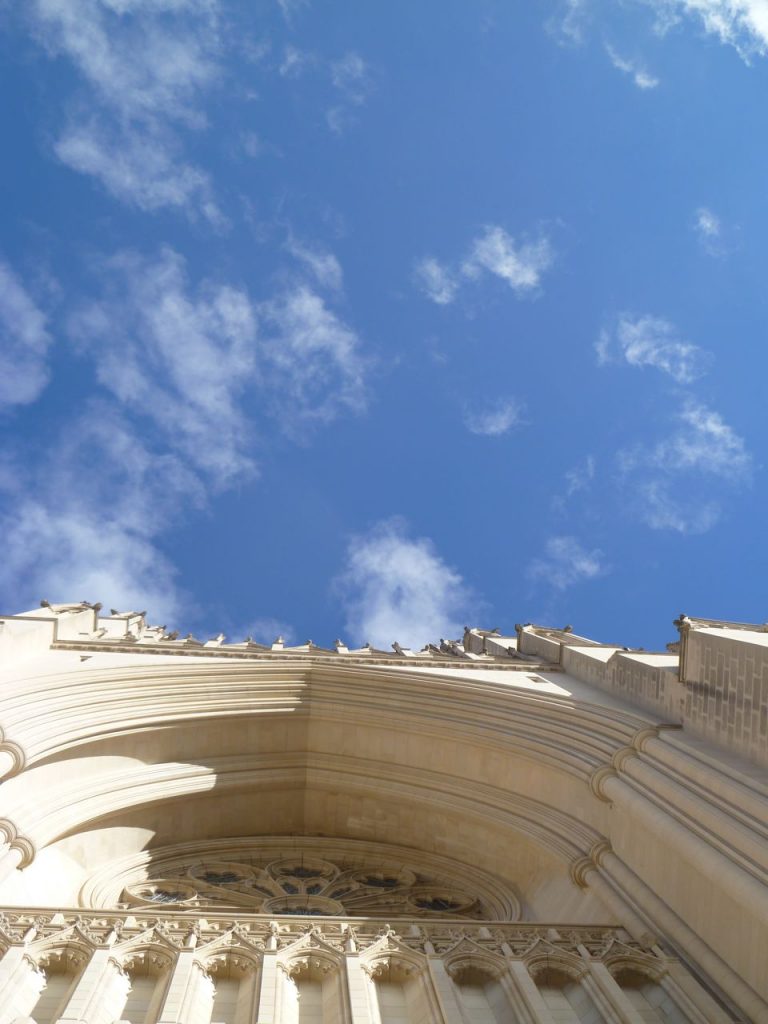 Its force fortunately subsiding as I turned the corner to face the 517′ 8” nave that once was “picture perfect”  in 2005. 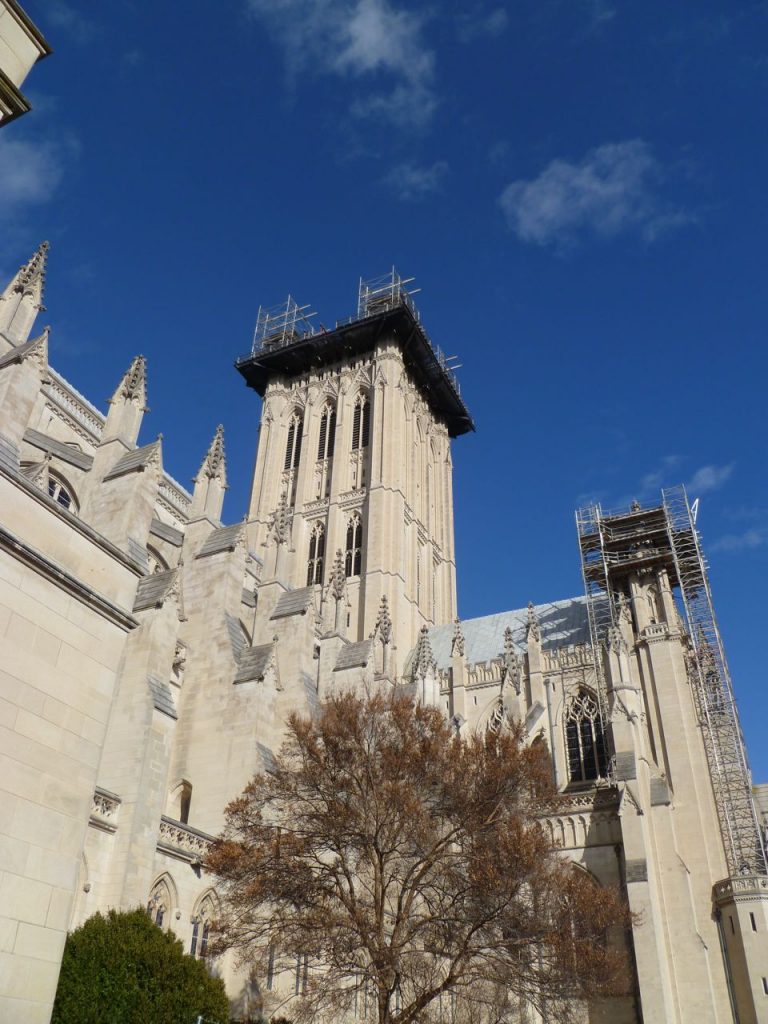 and south transept porch, both battered by the 5.8 magnitude earthquake of August 23, 2011; in only a few minutes causing an estimated $26 million dollars in destruction. 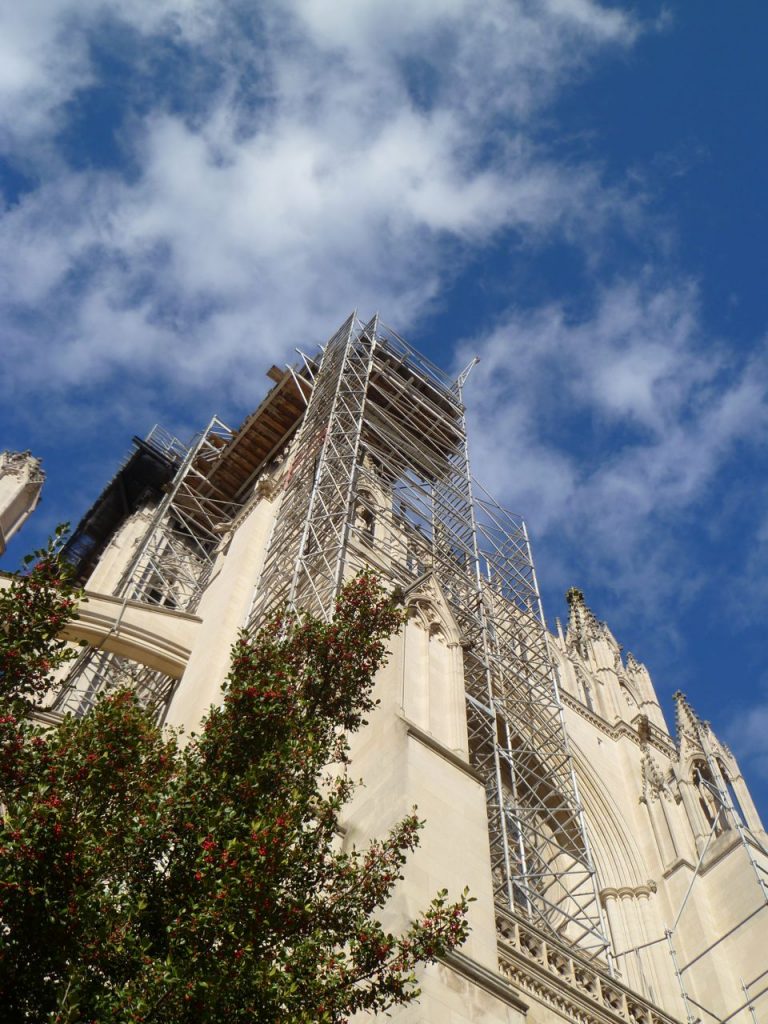 Yet somehow Gabriel, one of 288 Cathedral angels, survived still holding the sacred scroll, along with his fierce protectors, the gargoyles. 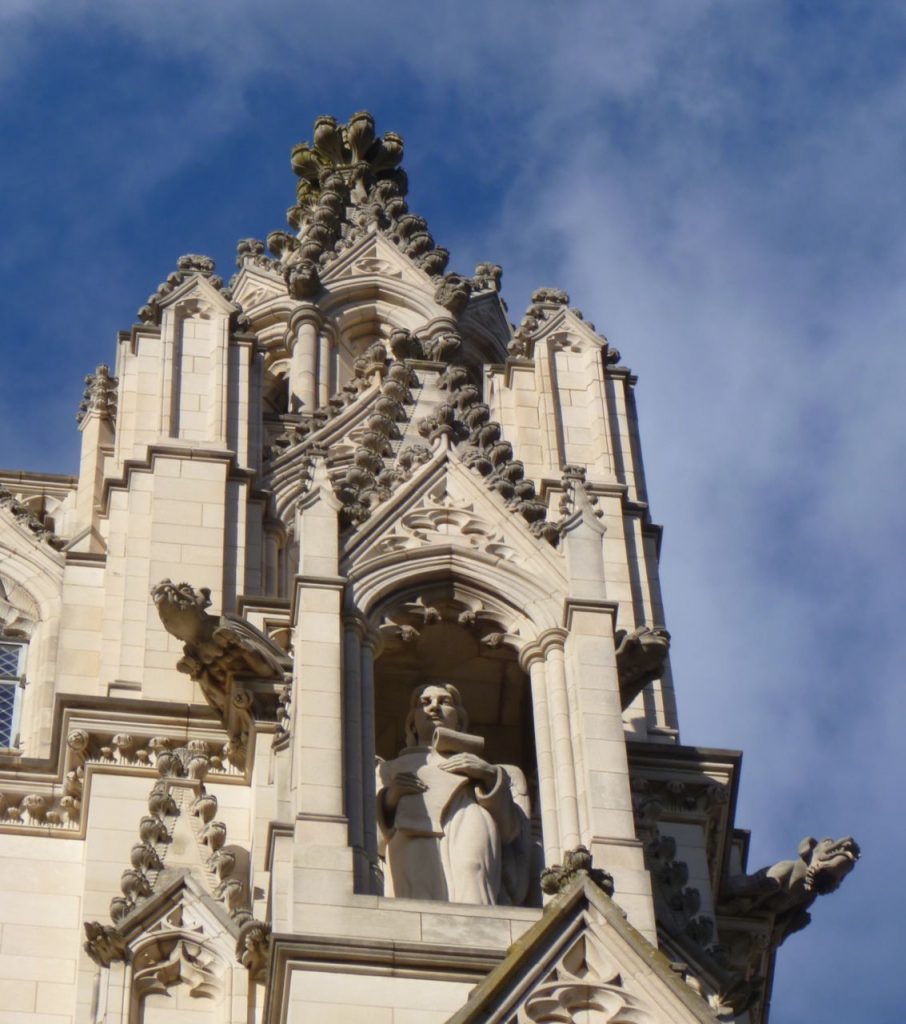 Inside, the stained glass windows are also basically undamaged, including the ethereal Creation Rose below dominating the west entrance. Which, according to its artist Rowan Le Compte, who designed 42 of the church’s 231 stained glass windows, seeks to sing its own hymn of praise to the universe.  For all its impressive size in the cathedral that must be a tiny song indeed when we pause to consider the infinite grandeur of the cosmos, this unimaginably vast created and creating mysterious miracle.

However, I was drawn to the shimmering darkness of the memorial bays, leading off the nave. The effect especially dramatic in the fading winter daylight as I aimed my camera on Founding of a New Nation above the statue of George Washington.  Unlike traditional stained glass windows, it is abstract in concept, a brilliant collage-like representation of freedom, in a dance of moving forms and sensational colors done in 1975 by Robert Pinart.

Next, the radiant power of War and Peace created earlier in 1961, emerging from the sanctuary of Woodrow Wilson’s tomb, the only chief executive buried within the Cathedral. 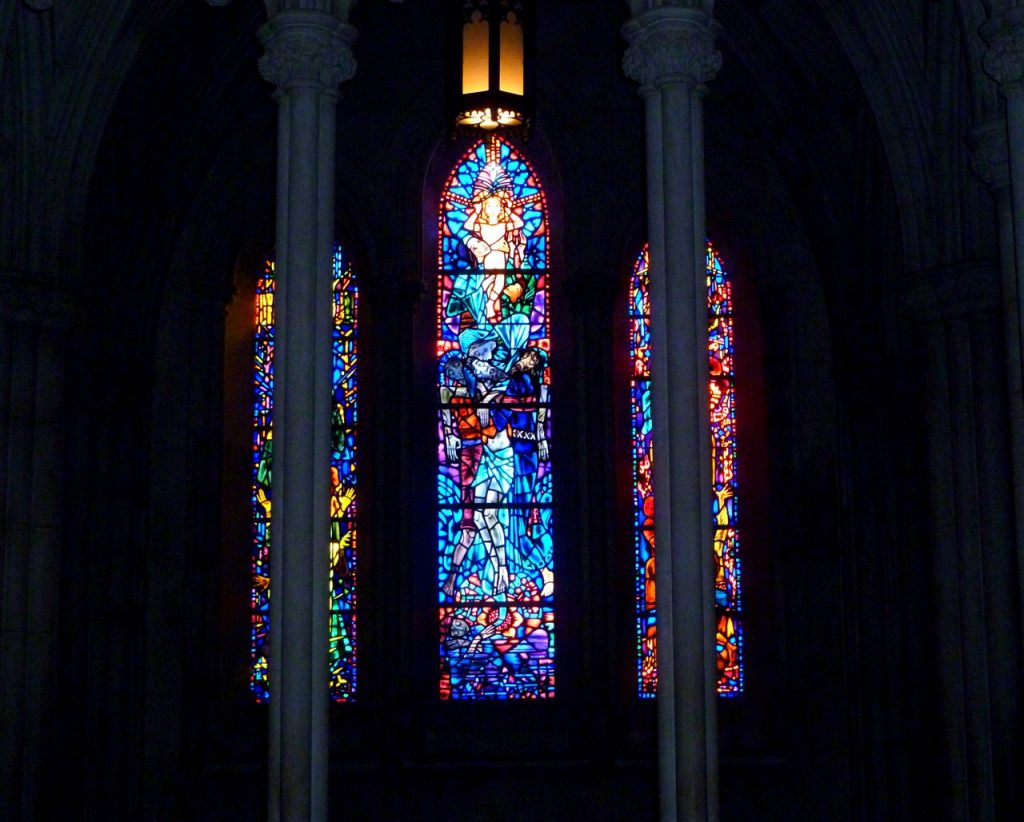 National Cathedral, War and Peace, no artist given, 1961

Then managing a detailed shot of the Andrew W. Mellon Bay window, 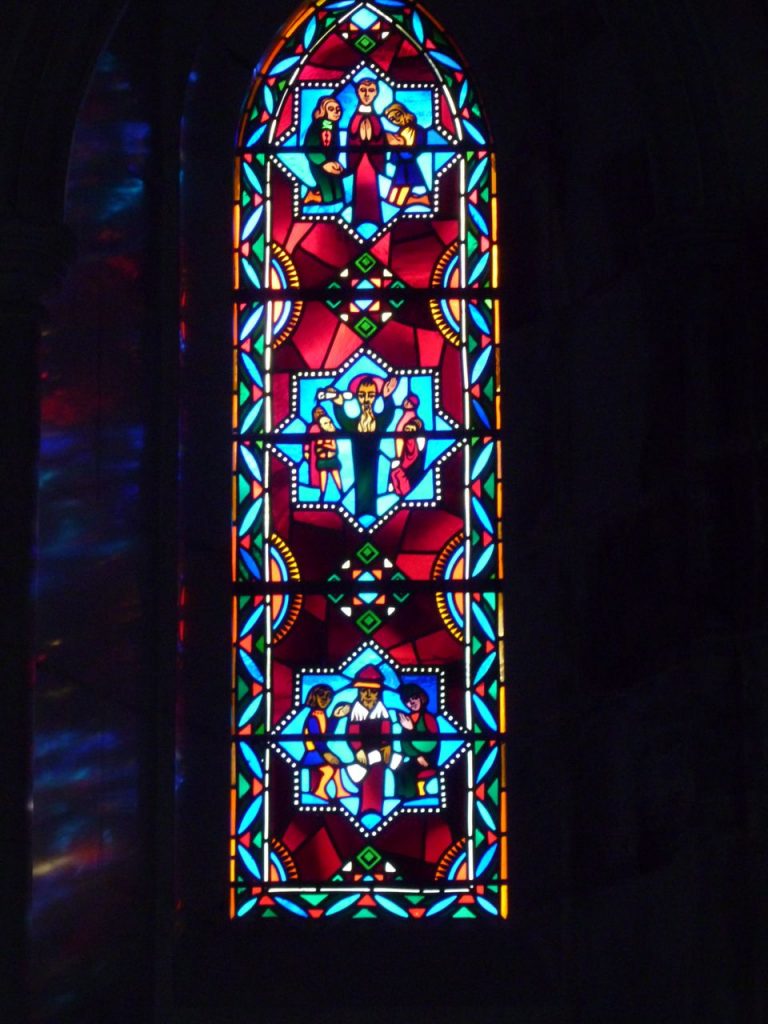 except I was hypnotized by its fiery reflections on the adjacent wall, forgetting briefly that I had to leave soon for another appointment.

Pausing once more in the nave, before I exited, absorbing the rainbow patterns cast by the clerestory windows where, in the words of Robert Pinart, the glass plays magical tricks, I feel there is an emotional response to color, very close to music.

Formation: 1893, about a century after original National Church planned in 1791, however, cathedral mainly privately funded

Only North American cathedral with both peal and carillon bells

112 gargoyles including a portrayal of Darth Vader; also noted for Space Window by Rodney Winfield with moon rock in honor of Apollo 11 (1973); three rose windows 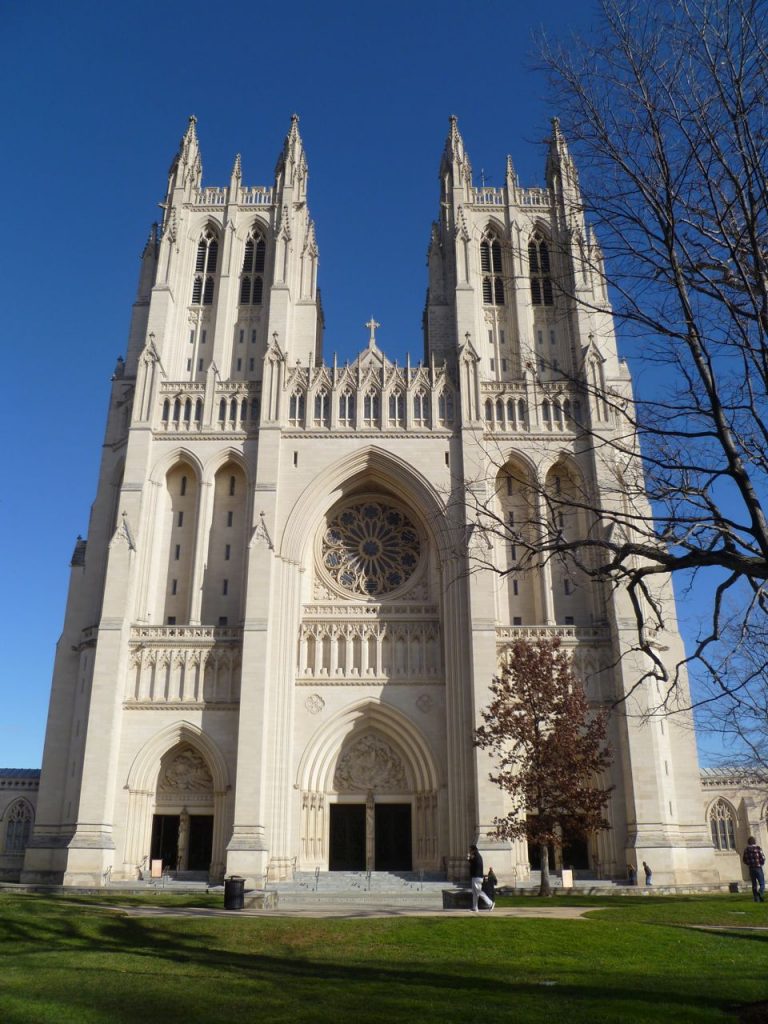