THROUGH A SISTER’S EYES

To celebrate Women’s History Month this week, I decided to focus on some subjects by female artists that may not be as familiar, For instance, have you heard of Lydia Cassatt? The older sibling of Impressionist Mary Cassatt,* she died prematurely at 45 in 1882.  She  might otherwise be forgotten except for several paintings done by Mary in the waning years of Lydia’s life. A period when her health gradually deteriorated from the the effects of what is often diagnosed as  Bright’s disease, a kidney ailment.

Born in the United States on July 23, 1837, Lydia initially appears in Mary’s works in the late 1870s, when they were sharing an apartment in Paris, along with their parents. Despite her reoccurring illness, she managed to lead the normal lifestyle of a woman of her affluent class including daily rituals such as reading, maintaining her correspondence, entertaining, and the inevitable needlework.

But does Lydia through her sister’s eyes remain an enigma?  First seen here at a distance in Lydia Seated in a Garden with a Dog below, surrounded by a rainbow spectrum of blooming flowers.  Absorbed in crocheting or sewing, accompanied by the Cassatt pet, a Brussels Griffon, who has stationed himself on her already crowded lap. Content and fulfilled by her task, enhanced by the perfection of a summer day. 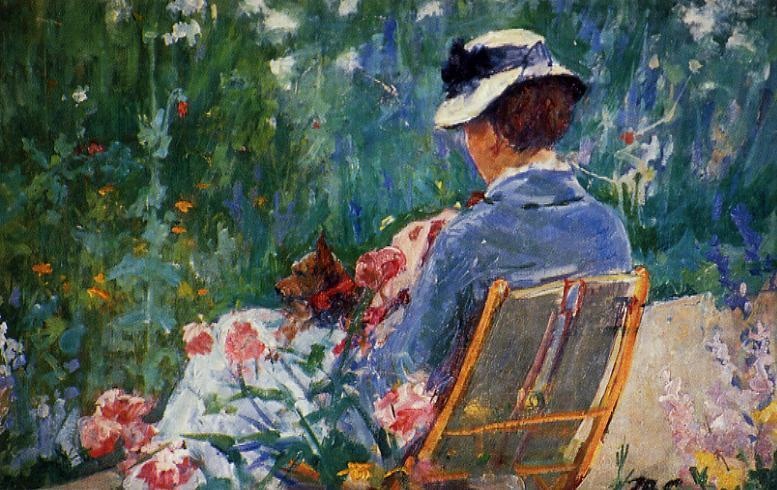 Mary Cassatt, Lydia Seated in a Garden with a Dog in Her Lap, c. 1880, oil on canvas, Private Collection

Whereas in Autumn, Lydia’s mood perhaps reflects the prospect of coming winter. Solitary and even isolated on the park bench, she seems determined not to be disturbed, although the fall tones of her shawl add to her attractiveness.

Yet, in The Cup of Tea, Lydia is decidedly relaxed, pleased with herself and her caffeine refreshment. Attired in spring pink (or is it more a peach?) and long cotton gloves, she reclines backward, unconcerned about the somewhat precarious position of her spoon.

However, Tea time may also be a rather tedious experience, particularly when regulated by social rules and obligations. is Lydia bored by her companion, who is required to visit for at least 15 minutes? Or simply pensive, listening to the conversation of an unseen occupant of the stylishly decorated parlor with its striped wallpaper, gilded mirror, and impressive silverware, probably a familial heirloom.

Then again, Lydia appears definitely more engaged in the driver’s seat of the Cassatt new carriage in Driving, perhaps trying to rival Mary who was an accomplished horsewoman.  Except her passenger, generally identified as Edgar Degas’ niece, looks unsure of Lydia’s competence, hanging onto the side just in case.

Even the talented Mary, though, cannot compete with Lydia Seated at the Embroidery Loom.  In which she proudly portrays her sister’s prowess in needlework, with an emphasis on the expression of quiet confidence on Lydia’s face, as she creates her own work of art . Often recognized as a final portrait, it is perhaps a farewell to their relationship as recorded in paint: a bond based not only on blood ties, but of artist and model. For Lydia ultimately contributed to furthering Mary’s career, a partner in the exacting process of producing a masterpiece.

Is the vibrant Woman with a Pearl Necklace in a Loge, which debuted in the fourth Impressionist show in 1879, actually Lydia?  The answer is yes, no, or maybe depending upon the art historian. What is your opinion? 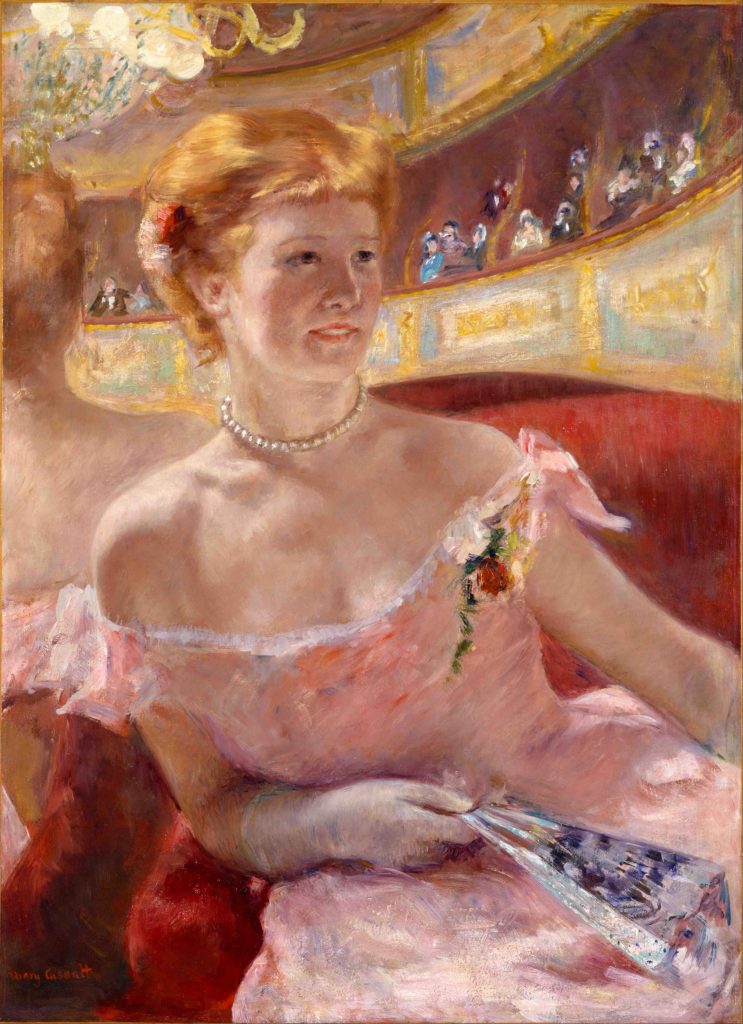 Mary Cassatt, Woman with a Pearl Necklace in a Loge, 1879, oil on canvas, Philadelphia Museum of Art, Pennsylvania

Among the resources for this blog are: Mary Cassatt–Modern Woman by several art historians, organized by Judith A. Barter, catalogue of exhibition, published by The Art Institute of Chicago with Harry N. Abrams, Inc., Publishers, Chicago, 1998 and The New Painting—Impressionism 1874-1886 by a number of art historians, including Charles S. Moffett, catalogue of exhibition, published by The Fine Arts Museums of San Francisco, California, 1986.

Welcome in the new season with Through an Artist’s Eyes: Learning to Live Creatively!