Edgar Degas (1834-1917) and Mary Cassatt (1844-1926) are often paired together in art.  But unlike other famous duos such as Frida Kahlo and Diego Rivera, Georgia O’Keeffe and Alfred Stieglitz or Auguste Rodin and Camille Claudel, their personal relationship remains a mystery.  Were they romantically involved?  Or did they have solely a platonic friendship?

The current Degas/Cassatt exhibition at the National Gallery in Washington, D.C. doesn’t attempt to answer these questions, focusing primarily on the two artists’ professional collaboration.  You might click on the link below, to view several works in the show; a special brochure is available online plus a unique audio presentation given by the exhibition’s curator.

Degas/Cassatt at the National Gallery of Art

Since the Andrew Wyeth quiz was so popular a couple of blogs ago, I thought I’d try again with Cassatt and Degas as the subjects.  Then next week the theme will be fathers and sons in art to celebrate the upcoming holiday.

So why not take a look at this variety of questions:

1. Mary Cassatt was truly an American in Paris.  She spent most of her adult life in France, becoming part of the Impressionist circle, counting Edgar Degas, Berthe Morisot and others as both her colleagues and friends.  Where was she born?

A.  New York    B. Pennsylvania   C. Massachusetts   D. France, while her parents were traveling in Europe 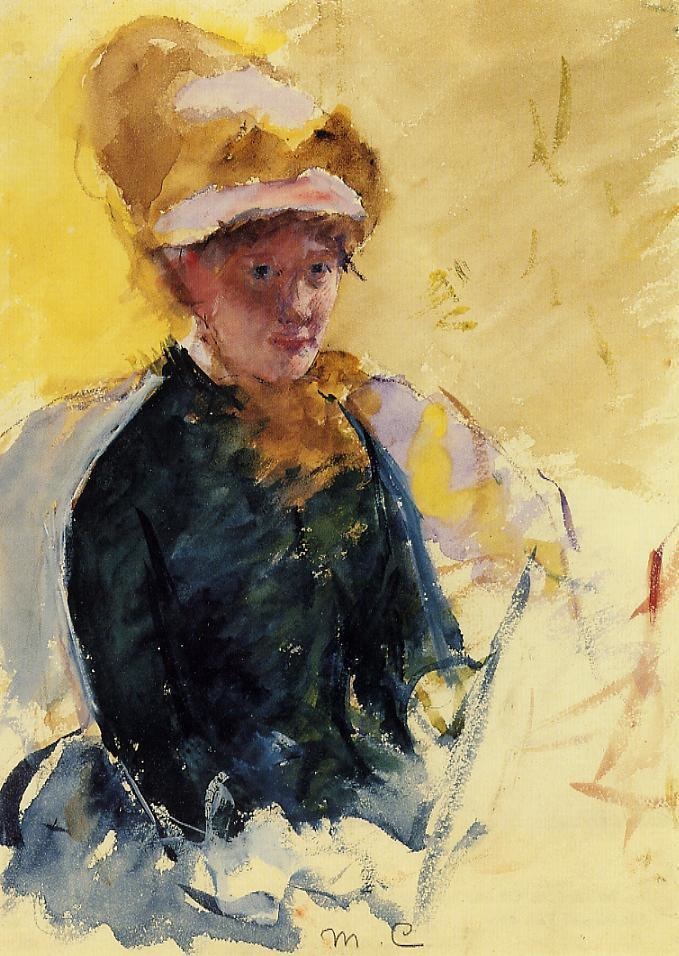 2. Mary Cassatt never married, although she did have some suitors including American investment banker James Stillman (who also purchased 24 of her works).  What about Edgar Degas?

A.  He was wed briefly to a first cousin from his American mother’s family (the marriage was annulled)    B. He, like Mary Cassatt, lived with his parents until he was middle aged   C.  He kept a mistress for a number of years    D. None of the answers 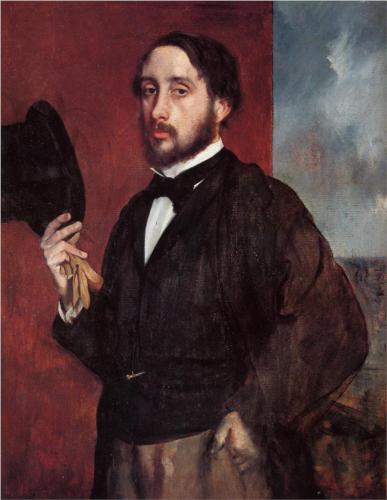 3. Mary Cassatt’s women often possess a strength and dignity even when doing everyday tasks. One model in  particular inspired the artist in several domestic scenes.  Who was she?

A.  A family member    B. An American friend residing in Paris    C.  A servant of the Cassatt household    D.  None of the answers 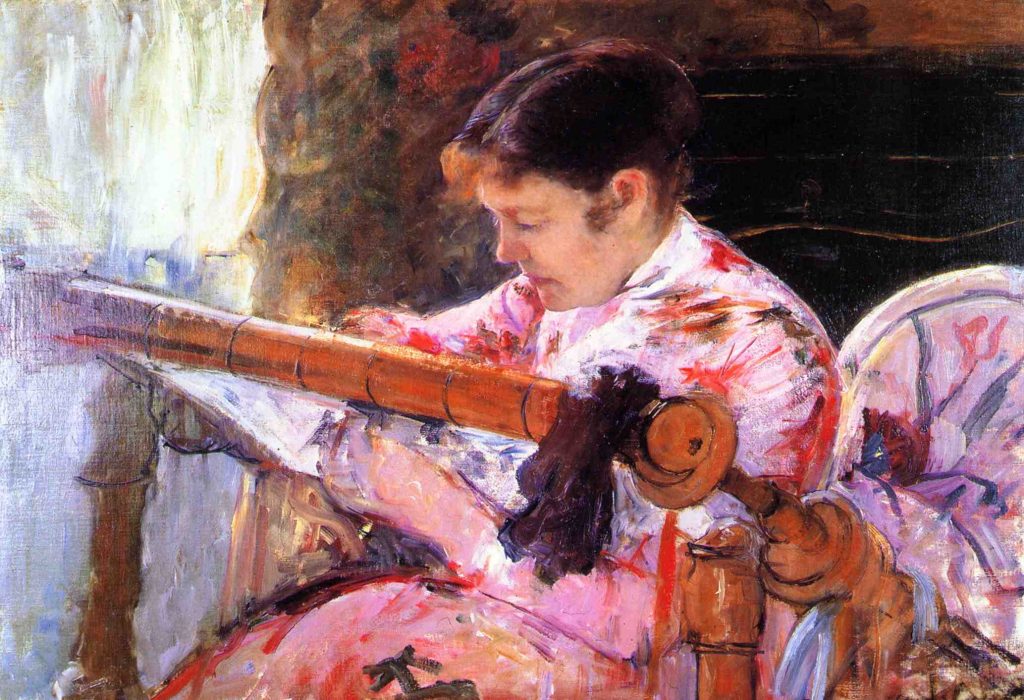 4. Another artist besides Cassatt was greatly influenced by Degas, idolizing his style and approach to interpreting contemporary life.  Can you identify this famous painter?

5. Mary Cassatt’s close friend Louisine Elder Havemeyer was an avid collector of Impressionist art, purchasing her first Degas when she was only in her teens.  Can you name the  art museum that has benefited from her generous contribution of some 4,500 works such as Degas’ Dance Class and Edouard Manet’s Boating below. 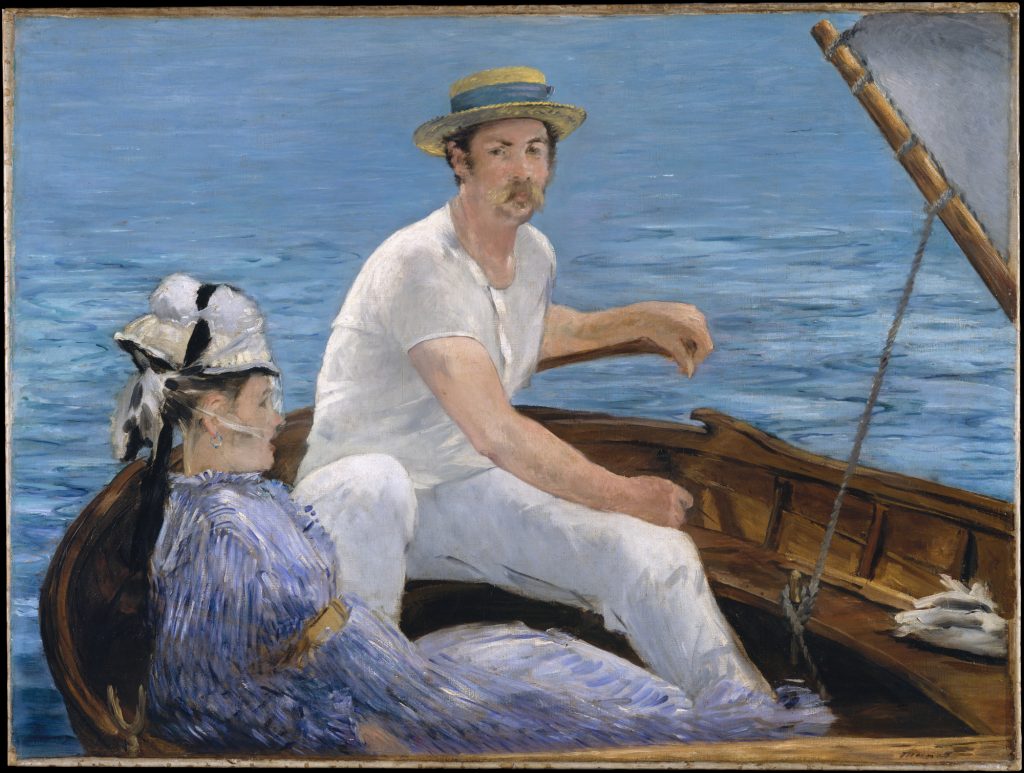 6.  Mary Cassatt was multi-talented and actually received a patent from the United States for the following invention:

A. A non-toxic chemical for cleaning brushes    B. A device for fractured legs    C. The first typewriter ribbon    D. A special brush for small dogs

1B.  Pennsylvania.  Cassatt was  born on May 22, 1844 in Allegheny City near Pittsburgh, Pennsylvania; she grew up mainly in the Philadelphia area.  Her father Robert Cassatt was a successful entrepreneur (in banking, manufacturing, and real estate), securing financial independence by his forties; her mother Katherine Kelso Johnston was educated by an American woman who had lived in France.

2D. None of the Answers.  Degas remained a bachelor throughout his life.  Art historians have often viewed him as a misogynist, although he encouraged Mary Cassatt and other female artists to pursue artistic careers. His brother Rene did marry his first cousin Estelle from New Orleans; he ultimately deserted her for another woman.

3A. Sister Lydia Cassatt.  Lydia was 7 years older than Cassatt.  She and Mary shared an apartment in Paris (later joined by their parents), beginning in 1874 until her death in 1882.  During those years, Lydia was Mary’s favorite model, appearing in well known works such as Four O’ Clock Tea and Lydia Crocheting in the Garden at Marly.  She died prematurely at about 45, of possibly Bright’s Disease, a chronic kidney ailment, although the exact cause has not been determined.

4D. Henri Toulouse Lautrec.  Lautrec was 30 years younger than Degas and in awe of the elder painter’s talent and creativity.  But Degas generally ignored his admirer, perhaps wary of Lautrec’s promise.

5D. The Metropolitan Museum of Art.  The New York museum has been the fortunate recipient of the extensive bequest of  Louisine and her husband Henry Havemeyer, a sugar magnate.  In addition to French 19th century masterpieces by artists such as Degas, Cassatt, Manet, Monet, and Cezanne, the Havemeyer donation is quite diverse ranging from  Old Masters Rembrandt and El Greco to Islamic art.

6B. A device for fractured legs.  During World War I, Cassatt cared for the wounded soldiers of the French army; as a result of this experience she had a hammock for fractured legs patented in the United States. Perhaps breaking a leg herself  in a fall from a horse in 1889, might have also been a factor in creating this invention.

The sources for the answers to the blog are from Mary Cassatt: A Life by Nancy Mowll Mathews, Yale University Press, New Haven, Connecticut, 1994, Toulouse-Lautrec by Matthias Arnold, Taschen, Cologne, Germany, and Degas and New Orleans: A French Impressionist in America (catalogue for exhibition) by Jean Sutherland Boggs, and other art historians, New Orleans Museum of Art, 1999.

And discover more answers about life and art in Through an Artist’s Eyes: Learning to Live Creatively!