For the ART CIRCLE group and our upcoming discussion of Creative Routines…..

DINING IN PARADISE WITH PIERRE BONNARD

Bonnard’s room seems a paradise in which to dream rather than to dine.  Colors for all the senses vibrate and surprise as they multiply: lavender, tangerine, fuchsia, chartreuse, maroon, turquoise, ad infinitum.  Does anyone really live here?  A table awaits you, powdery blue in hue, one on which fruit concoctions are placed resembling sugar cakes.  It seems unlikely that you’ll have your choice of comfortable chairs, both of them already occupied by house cats who blend in with the decor.  Their mistress hovers quietly close by, pausing before she enters her own private world. 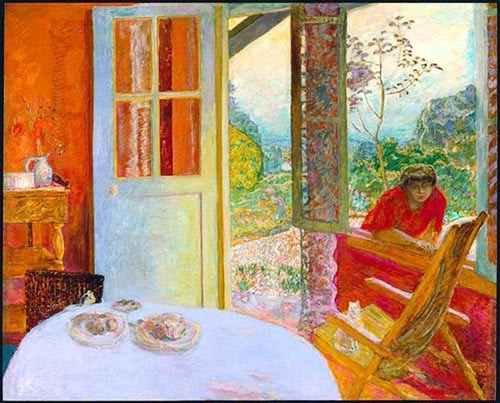 Pierre Bonnard, one of the leading artists of the first half of the twentieth century, immortalized his dining rooms frequently during his career, in his homes in the Seine Valley near Paris and the Riviera in the south of France.  Dining Room in the Country was painted in Ma Roulette (My Caravan), Bonnard’s nickname for the more northern of his abodes, which he purchased in 1912.  His neighbor was Claude Monet, at the time in his early seventies, from whom Bonnard may have learned a few secrets about achieving a masterpiece.

From Through an Artist’s Eyes: Learning to Live Creatively by Joan Hart