This third installment on understanding the works of the Dutch master Johannes Vermeer (1632-1675) will focus on what is judged his greatest masterpiece, coveted by the 20th century’s most destructive man.

Isn’t an artist’s studio his sanctuary?  Where he is liberated, free to create a portrait, landscape, or in The Art of Painting, an allegory? Transforming a young girl, possibly his daughter, into an ancient muse while revealing the secrets of his creative process. The staging and rearranging of his favorite props in the exact lighting. Or the placement of his easel at the appropriate angle, as he effortlessly applies the initial brushstrokes. 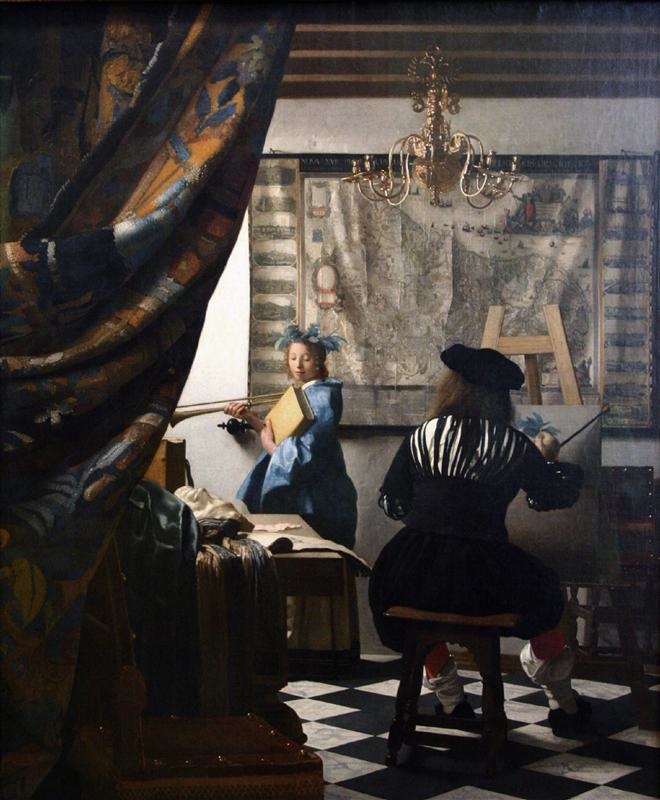 A Complicated Painting: Art historians and scholars have been fascinated by the meaning of The Art of Painting.  All experts do agree that it is an allegory in which the figures and actions symbolize a general truth or ideal.

History First: The angelic model is identified as the Greek muse Clio, who represents the theme of history, the highest form of painting, that tests the artist’s intellect and innovative powers . She smiles modestly, her eyes properly downcast, adorned with a laurel crown, emblem of honor, glory, and everlasting life. While both her hands are holding two more important signs: the trumpet embodying fame and the book by Roman author Thucydides standing for history.

More than a Craftsman: The status of visual art had been debated since the Renaissance. Leonardo da Vinci, for instance, had defended the superiority of painting over sculpture in his writings.  For was Vermeer, like his other colleagues, merely a craftsman?  Or had he attained the esteemed level of a poet or philosopher? Because unlike a carpenter or goldsmith, he could bring enduring fame to his country, symbolized by the map of Netherlands in the background.

True Self-Portrait? Like the subjects in the rest of Vermeer’s works, the identity of the artist has not been verified. Could it be assumed that he would naturally include himself in his painted testament to art? Also the authenticity of his apparel has been questioned, considered old fashioned for the 1660s, the approximate date of The Art of Painting’s execution. However, recent research indicates that the striking black and white costume had regained its popularity among Vermeer’s generation. In addition, one of his daughters might have posed for Clio.

Double-headed Eagle: Vermeer’s recreation of the golden chandelier, hanging from the wooden beams of the ceiling, is superb.  Probably too elaborate for an individual home, the artist might have seen it in a church or public hall. Do you notice the double-headed eagle of the Habsburgs, once Holland’s rulers, decorating the top? If not, click on it twice. Look, too, for the mask lying on the table, interpreted either as the personification of art as imitation of nature or simply an object used in the academic training of a painter.  And how do you like the rich marble tiled floor (also prominent in The Music Lesson now in the possession of Queen Elizabeth and other works).

The Grand Illusion: Do you feel as if you can actually enter The Art of Painting? Moving past the extraordinary curtain, its dynamic folds swept aside, to offer a clearer view. The light, the color, texture, and space rival reality, proof again that Vermeer and the members of his profession are equal to the masters of any art form.

Camera Obscura: Some experts theorize that Vermeer might have utilized the camera obscura, a predecessor to the modern camera.  Primarily to assist him in conceptualizing his final vision.

Hitler and Goring in Competition: The story of the provenance of The Art of Painting could be easily adapted to the screenplay of a movie.  Beginning with Vermeer’s widow desperately trying to save the painting (which the artist continued to keep in spite of his debts) from creditors, then probably failing. More than a century passes, with no record of its existence, until it resurfaces in 18th century Vienna  in the collection of  Count Johann Rudolf Czernin.

Misidentified as a work by fellow Dutch artist De Hooch, it is not verified as a Vermeer until 1860 by scholar Thore-Burger. Gradually, The Art of Painting ascends to the heights of the art world.  By the mid-1930s, heir Jaromir Czernin is determined to gain a fortune by selling it for $1 million dollars to Washington, D.C.’s National Gallery of Art founder Andrew Mellon, a transaction blocked by the Austrian government.

Adolf Hitler, who has always desired Vermeer’s masterpiece, is Czernin’s next customer in the summer of 1939. But the 2 million reichsmark price is unacceptable.  So Hermann Goring, also an avid admirer, attempts to acquire the work for 1.8 million reichsmark. Eventually, Hitler’s wishes take precedence, and he finally realizes his dream for 1.65 million reichsmark with a reduced sales tax in 1940.

Hitler’s enjoyment of The Art of Painting is brief.  Sometime in late 1943 or early 1944, he is forced to store the work in the Altaussee salt mine because of Allied bombing of Germany.  With the defeat of the Third Reich, the Kunsthistorisches Museum in Vienna becomes the painting’s final home. Yet, today the  Czernin family continues to attempt  to regain ownership of Vermeer’s supreme achievement.

Resources for this blog include Johannes Vermeer: The Art of Painting by Arthur K. Wheelock Jr with Mari Griffith, National Gallery of Art, Washington, D.C., 1999 and the website, The Essential Vermeer.

The above work of art is used solely for educational purposes.