BE CERTAIN to click on the paintings and photo to enlarge or enhance them.

EVERYTHING PROMISED HIM TO ME

Everything promised him to me:

the fading amber edge of the sky,

and the sweet dreams of Christmas,

and the wind at Easter, loud with bells, 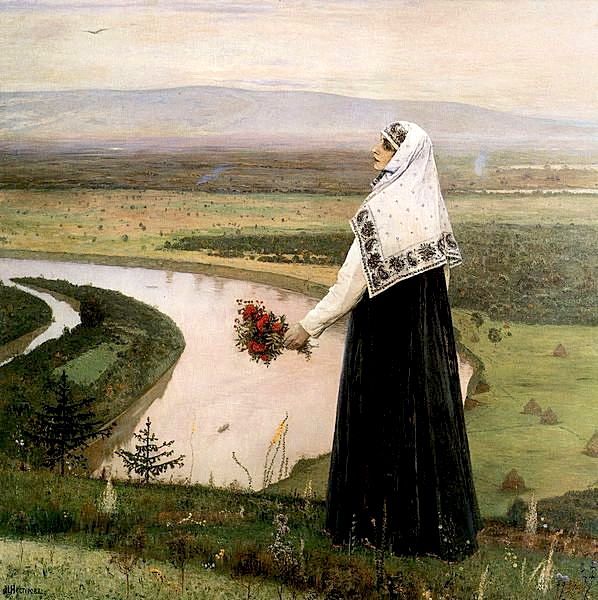 and the red shoots of the grapevine,

and waterfalls in the park,

on the rusty iron fencepost.

And I could only believe

that he would be mine

as I walked along the high slopes,

the path of burning stones.* 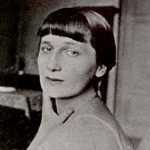 Anna Akhmatova (1889-1966) is recognized as one of the most beloved Russian poets of the 20th century, in spite of her verse being banned from 1925-1940 and for a period after World War II in her country.  Once a model and friend of Modigliani during her visits to pre-World War I Paris, Akhmatova inspired other artists to immortalize her haunting presence; she also attracted several lovers and married three times.  Born into wealth, she was later hounded by Stalin’s regime, suffering poverty as well as personal loss. 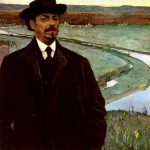 Mikhail Nesterov (1862-1942) was at least a generation older than Akhmatova, but like her, experienced the impact of the Russian Revolution and two major wars. He studied at the traditional Imperial Academy of Arts in St. Petersburg, then was influenced by the Peredvizhniki or The Wanderers, who focused on scenes of everyday life. However, Nesterov eventually earned a reputation as a painter of religious themes, often placing his spiritual subjects into rural settings.  In addition he decorated a number of churches and cathedrals with frescoes.  With the establishment of the Bolshevik government, though, these commissions were discontinued and he spent the remainder of his artistic career producing mainly portraits.

*from Art & Love: An Illustrated Anthology of Love Poetry, selected and introduced by Kate Farrell,  Metropolitan Museum of Art and Bullfinch Press, New York, 1990.  Sources for this blog are from art and poetry websites.

Photo is in the public domain.