I was originally going to write just one blog on Hitler’s Personal Gallery: Searching for Rembrandt’s Self-Portrait, but I realized that this subject requires two parts. So, be patient, you’ll eventually discover this remarkable work of art.

Of all the artists in his collection for the Fuhrermuseum (see: Monday’s blog), Hitler probably most admired Rembrandt (1606-1669). Proclaiming once that the Dutch master was at heart a true Aryan and a German,* overlooking both Rembrandt’s heritage and his numerous depictions of Jews who were his neighbors as well as friends in 17th century Amsterdam.

Between 1940 and 1945, Hitler was in possession of one of the approximately 90 self-portraits that Rembrandt had created throughout his career, more than any other figure in Western art.  A painted testament to his life of over 6 decades, such as Self Portrait with a Gorget representing the youthful idealism of a 23 year old, now at the start of his profession in his native Leiden. 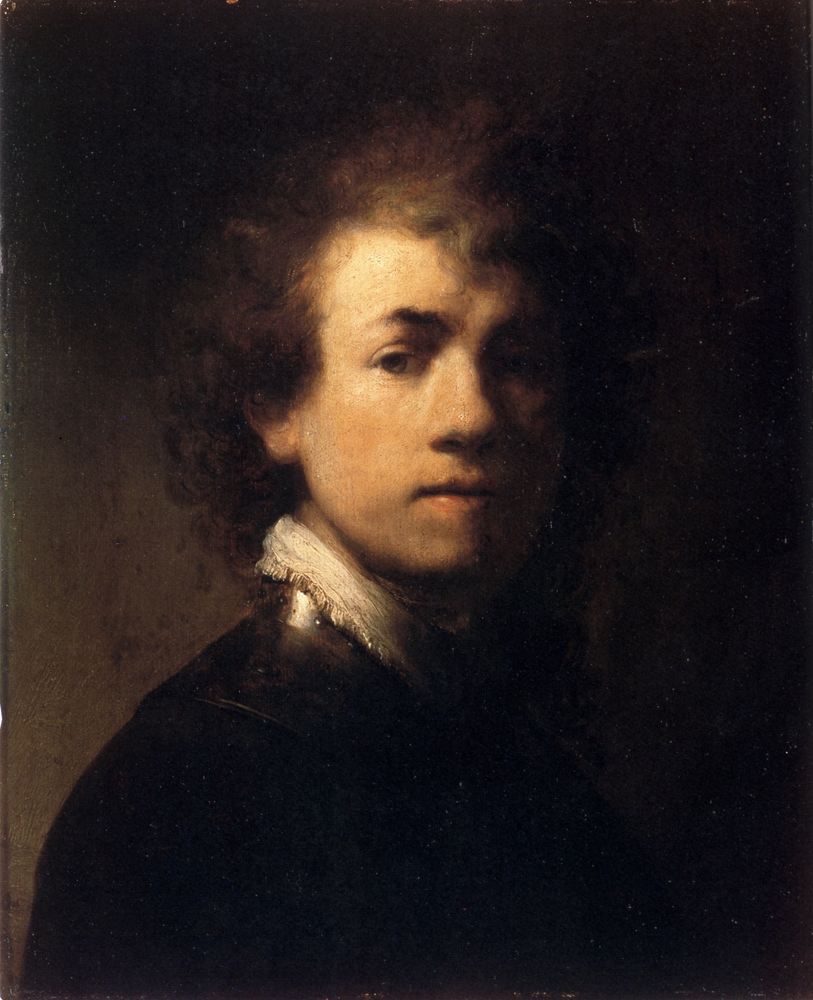 Yet, also during this period, Rembrandt was capable of an angry outburst.  Or is he just practicing facial expressions in front of the mirror to aid him in depicting the range of human emotions, in this uniquely titled etching, Self Portrait, Open Mouthed. 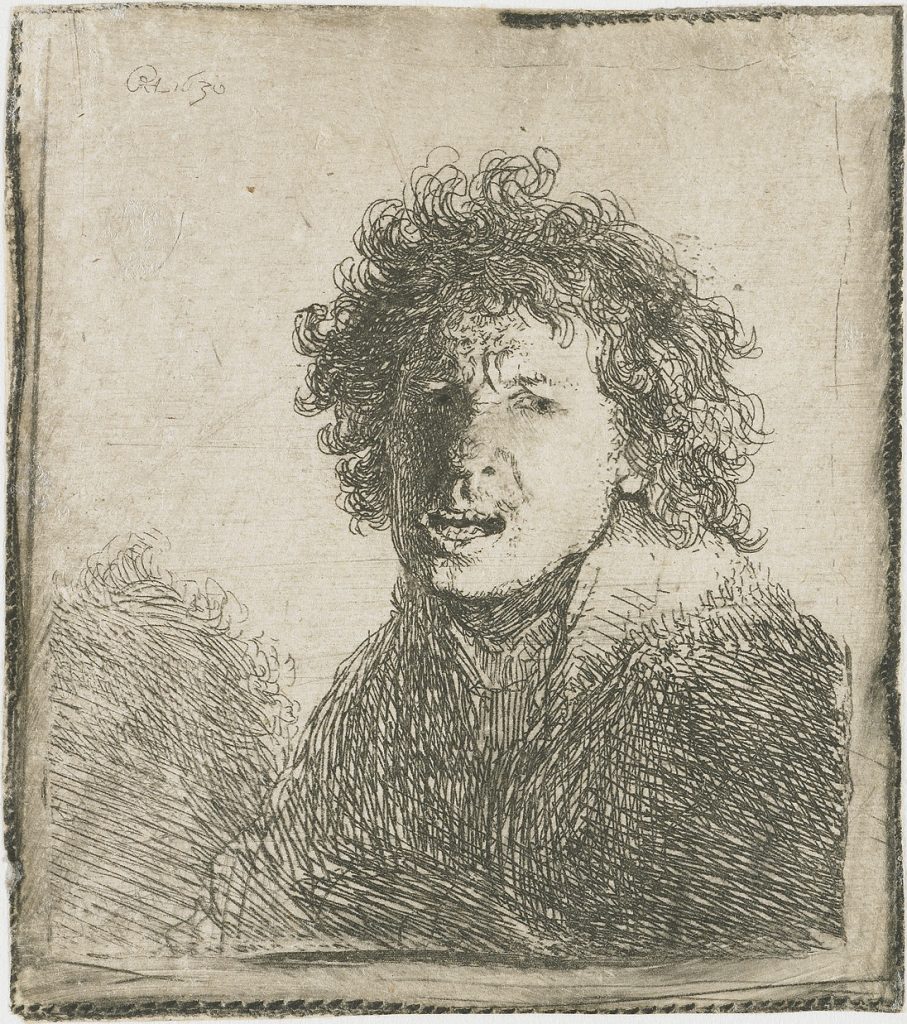 By 1631, he had relocated to Amsterdam, a mandatory move for any ambitious Dutch painter.  Already gaining recognition as a talented portraitist,  Rembrandt in Self Portrait in Oriental Attire with Poodle, shows off the symbols of his new prosperity including his regal garments and a not so cooperative dog.

He soon married Saskia van Ulenborch, the cousin of his art dealer landlord, enjoying with her husband an affluent lifestyle.  However, in Self Portrait with Beret of 1634, he visualizes himself as a romantic, a dreamer, free to pursue beauty and love.

Although, in Self Portrait with Raised Sabre again of 1634, Rembrandt could be protective, on the defensive, wielding his unrealistic looking saber, against enemies, both real and imagined. 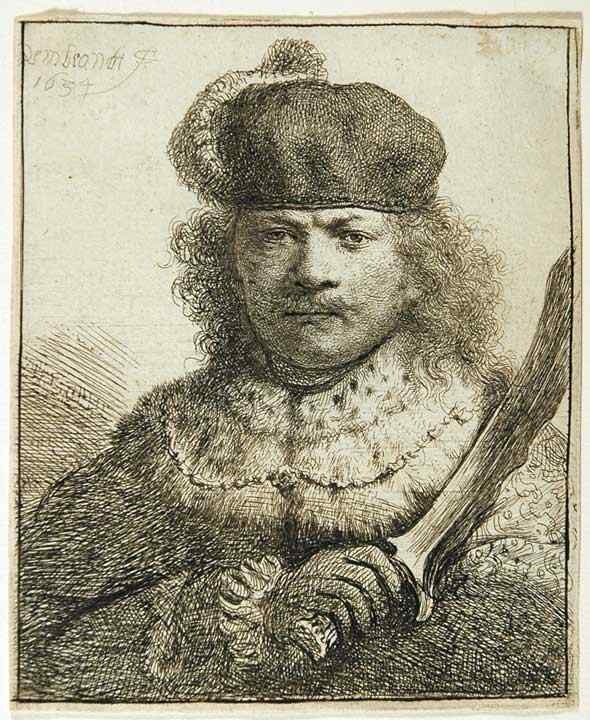 While in Self-Portrait of 1640, done when he was 34, Rembrandt has no rival, confident in his material success: impeccably dressed and bejeweled, the toast of Amsterdam.  Except do you see some sadness in his eyes?  For Saskia was slowly dying, perhaps of TB and endless pregnancies, resulting in only one surviving son, Titus. 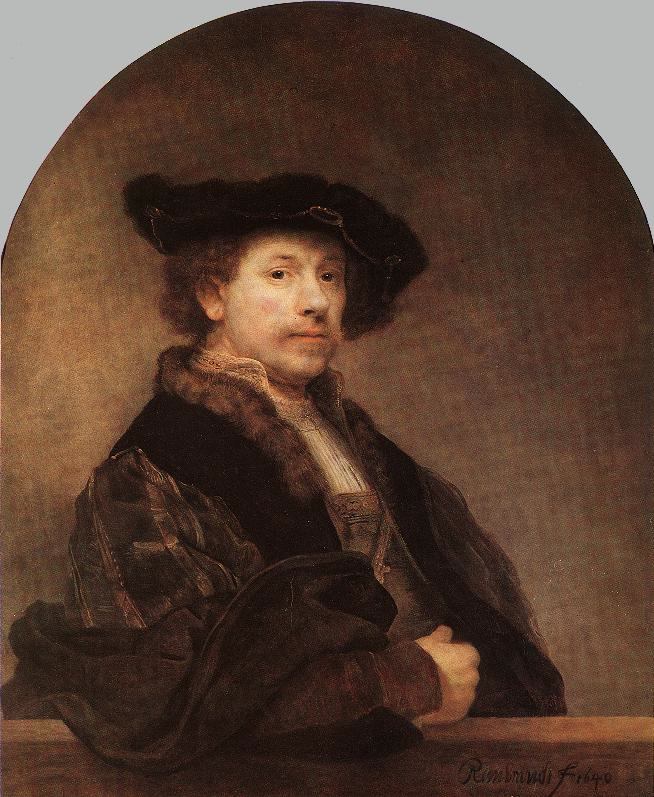 THE TRANSFORMATION OF REMBRANDT

*Quote is from Ernst Hanfstaengl’s account of a visit to Berlin’s National Gallery with Hitler in the early 1920s, related in The Lost Museum by Hector Feliciano, Basic Books, New York, 1995.

Sources for this blog include An Introduction to Rembrandt by Kenneth Clark, Harper & Row, Publishers, New York, 1978.

And learn more about Rembrandt and his self-portraits in Through an Artist’s Eyes: Learning to Live Creatively.