Click on the works of art to enlarge or enhance, especially the horizontal images.

My pictures, in the collections which I have bought in the course of years, have never been collected for private purposes, but only for the extension of a gallery in my home town of Linz a.d. Donau. It is my most sincere wish that this bequest may be duly executed.

Adolf Hitler, Last Will and Testament

On April 28, 1945, just two days before he committed suicide in his underground Berlin bunker, Adolf Hitler dictated his last will and testament to a secretary. The document was short and mainly a statement about the reason for his marriage to Eva Braun (being conducted shortly), his beneficiaries, and the appointment of his executor Martin Bormann. Hitler also explained how he and his new wife were choosing death in order to escape the disgrace of deposition or capitulation and that their bodies were to be cremated.

Yet, in the middle of his final communication to posterity, is Hitler’s concern about preserving his collection of art for the Fuhrermuseum,  which was to have been established in his adopted home town of Linz, Austria.  While just over a month before on March 19, as the Allies closed in on his Third Reich, Hitler had decreed the annihilation of Germany’s infrastructure to counteract the advancing enemy troops. In fact, one of Hitler’s fanatical officials. August Eigruber, almost blew up the works meant for the Fuhrermuseum stored near the end of the war in the Altaussee Salt Mine in Austria, believing that he was carrying out his leader’s orders for total destruction.

Today the German Historical Museum has complied a database of 6,7000 paintings, sculptures, furnishings, procelains, and tapestries, many of these works intended for Hitler’s dream museum including priceless masterpieces, from Jan van Eyck’s The Ghent Altarpiece to The Art of Painitng by Vermeer.  In this 3 part series, I can only offer a virtual tour of a tiny fraction of these vast holdings, the majority of them probably stolen or confiscated. Starting first with a random selection of paintings by both famous and unfamiliar artists (who often happen to represent the Dutch Golden Age).  I’ll be providing fast facts on each work, without including my insights and opinions so you can make your own judgements. Then Wednesday and Thursday, I’ll be highlighting Rembrandt’s self portrait and the week of October 20, the Vermeers.

In addition, Hitler had two major consultants who advised him on his collection: Dr. Hans Posse, director of the Dresden Museum, serving from 1939 to 1943 (when he died of cancer) and Hermann Voss. Posse reportedly insisted that Hitler, who had favored 19th century realistic painters, raise the level of his aesthetic tastes, focusing on what the art historian considered the highest achievements of German, Dutch, French, and Italian art.

Generally acknowledged as an important artist of the Quattrocento or Italian Early Renaissance.  However, Crivelli’s style is generally identified with the earlier International Gothic period, particularly because of his emphasis on intricate, flowing lines, quite noticeable in the impressive hair of Mary Magdalene below, as well as rich costumes and gold adornments.

SELF-PORTRAIT, STUDY OF A HAND AND PILLOW

A major figure of Western art, usually defined as a Northern Renaissance master. Durer is especially renowned for his graphic work such as his engravings and drawings.  Pioneer in the area of self portraits, producing a visual autobiography beginning from the age of thirteen.  Can you guess how old he is in the unusual Self-Portrait, Study of a Hand and Pillow? 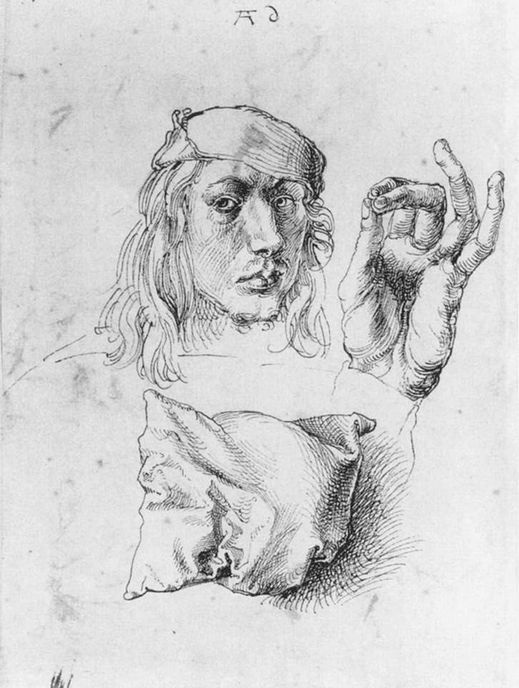 PORTRAIT OF A WOMAN

Super-portraitist of the Dutch Golden Age, producing scores of both individual and group portraits of Haarlam’s citizenry. Recognized for his ability to sum up the character and appearance of his sitters, utilizing distinctive brushwork as evident in the Portrait of a Woman  below. Although most of Hals’ commissions were from the wealthy segment of the city, he also captured the the rowdier lifestyle of the lower classes. 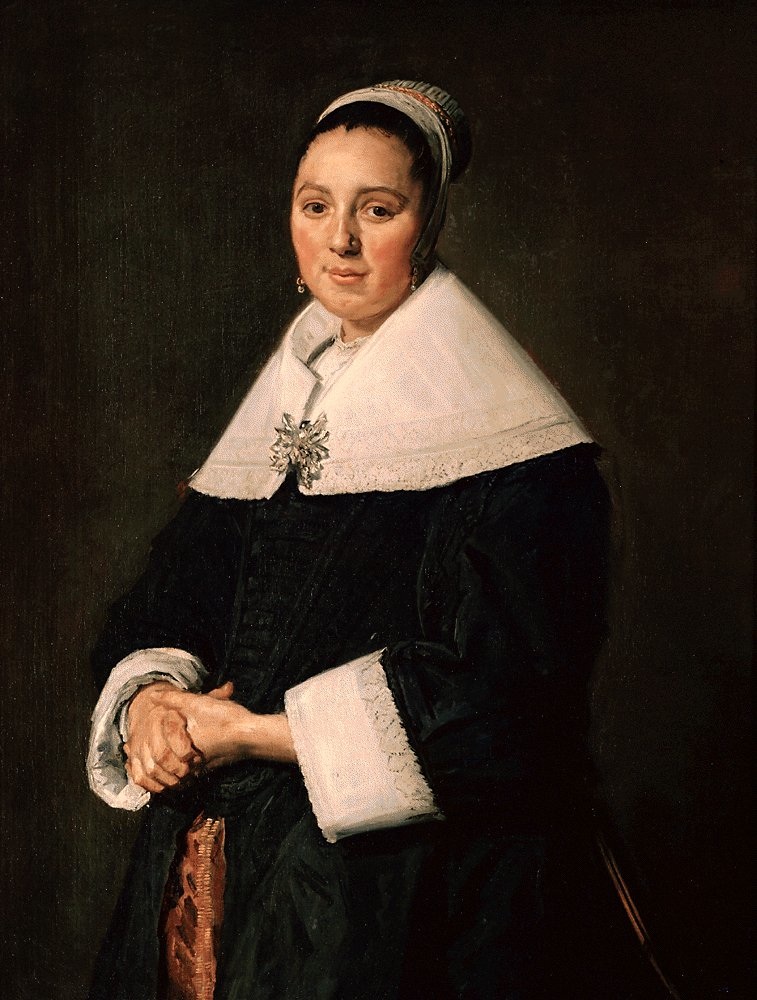 Specialist in still life during the Dutch Baroque era, arranging the tantilzing banquet of culinary bounty below—luscious fruits, sparkling wine, and a lobster that still looks alive. Van Beijeren developed an expertise too in reproducing the glistening surfaces of gold and silverware, fit for the table of a king. 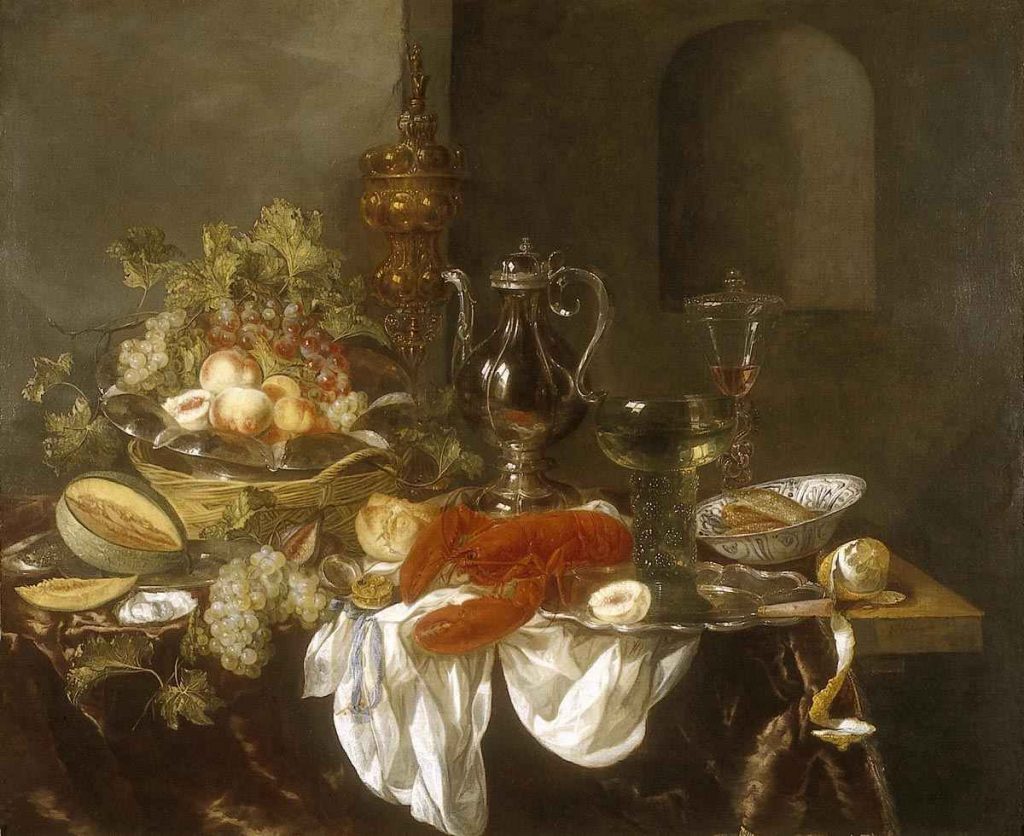 PORTRAIT OF A FAMILY

Little information is available on Abraham van den Tempel, another Golden Age artist.  He did have a successful practice in Leiden where perhaps these obviously prosperous clients, the Princess Albertine Agnes and her children resided, dressed in the latest fashion of the finest silk and satin materials. 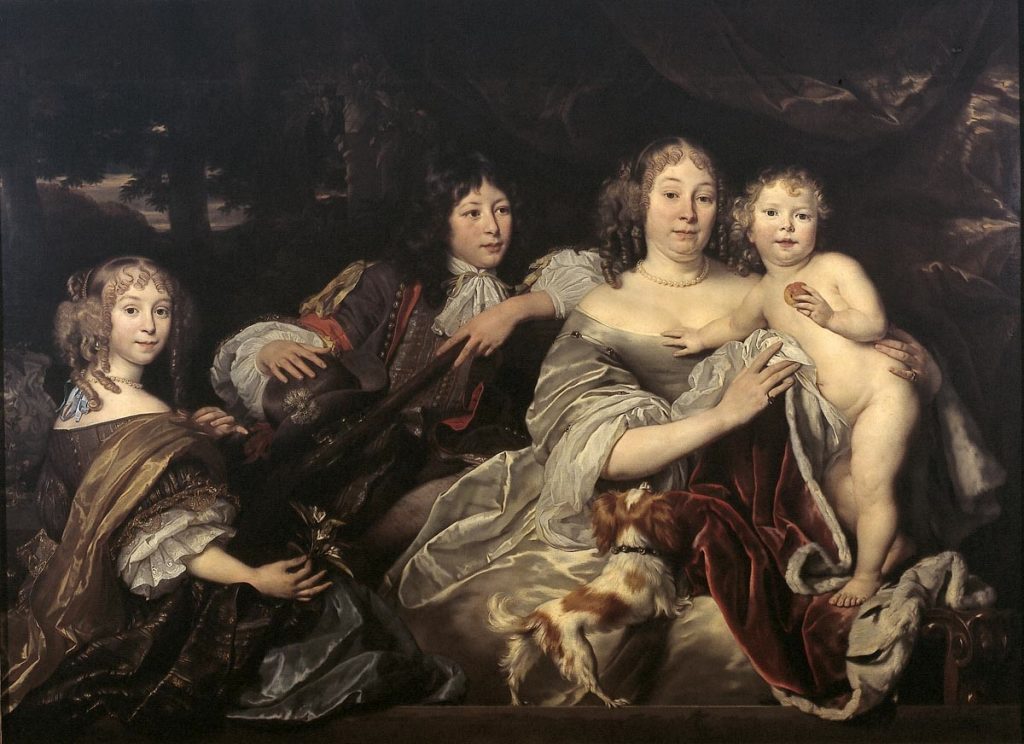 The theme of ships and marine painting must have been in the DNA of the van de Velde family, both father and son. Willem the Younger, for instance, accompanied the elder van de Velde to England, where they both were employed by King Charles II to depict scenes of military naval warfare. However, wouldn’t you rather contemplate the beauty of the sky overhead?

The charismatic Madame Pompadour was the mistress of France’s Louis XV for nearly 20 years. To promote her considerable charms, she regularly employed court painter Francois Boucher. He created some dozen portrayals of his patroness, done at the height of the Rococo style—a combination of flamboyant elegance, usually expressed in pastel colors and ornate decoration. Representing an era of joie de vivre and the pursuit of pleasure, soon to be overturned by the French Revolution.

MILL IN A VALLEY

Have you heard of Carl Blechen? Perhaps his reputation has been diminished by the passage of time and a change of taste.  Landscapes were his forte, recalling outings into the German countryside during the early part of the 1800s. Like Abraham van den Tempel above, background on Blechen’s career is scarce.

Would you like to know more about the Portrait of the Man of the Saturday blog?  He and his wife or fiancee are forever joined together in art by their portraitist, Maartin van Heemskerck, a 16th century artist who was active primarily in Haarlam.  The subjects might be Pieter Gerritsz Bicker and Anna Codde who could be posing to commemorate either their engagement or wedding. He is probably a merchant, efficiently tending to his accounts while she performs her household duties at the spinning wheel.

The sources used for this blog are:  The Monuments Men by Robert M. Edsel, Center Street publisher, New York, 2009; The Lost Museum by Hector Feliciano, Basic Books, New York, 1995; and The Rape of Europa by Lynn H. Nicholas, Vintage Books, 1995.