VAN GOGH AND THE CYPRESSES OF SAINT-REMY, PART II

ROAD WITH CYPRESS AND STAR

Road with Cypress and Star concludes my mini-exhibition of  Van Gogh and The Cypresses of Saint-Remy (see: Monday, September 29, for part 1), created almost a year after the majority of his works of this distinctive tree that moved the artist so deeply.  Like The Starry Night, to which it has been linked, Road with Cypress and Star has fascinated writers, sometimes being interpreted as a sign of Vincent’s recognition of his coming death. The cypress, for instance, has been historically associated with the end of life since the ancient Greek and Roman civilizations, particularly in cemeteries.

However, at least in his surviving letters, Vincent connects not the cypress, but rather the peasant in the field cutting wheat with dying as in The Reaper, which he described to his brother Theo in early September, 1889:

I am struggling with a canvas begun some days before my indisposition….For I see in this reaper—a vague figure fighting like the devil in the midst of the heat to get to the end of his task—I see in him the image of death, in the sense that humanity might be the wheat he is reaping… 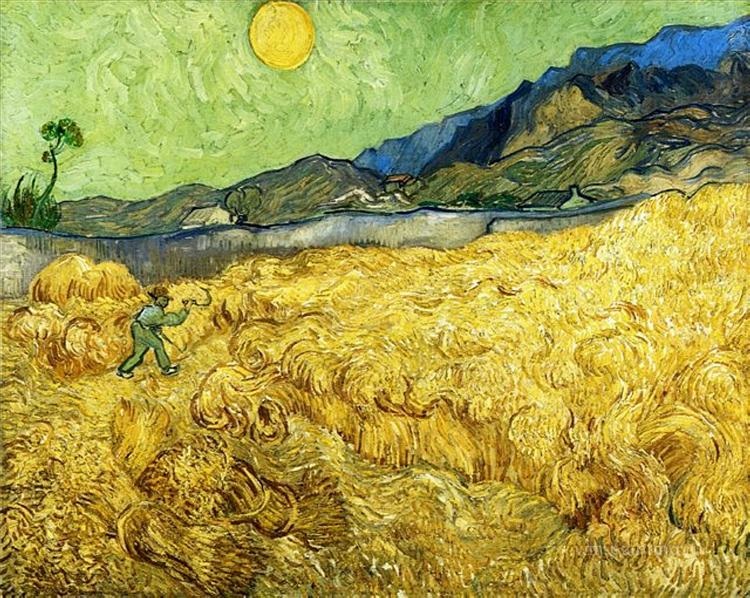 Yet some questions remain about Road with Cypress and Star.  Maybe you might find the answers.

Art historians generally do not dispute  that Vincent executed it in May, 1890, just before he left the mental institution at Saint-Remy for Auvers, where he would commit suicide some two months later. The painting is normally placed chronologically with Landscape with Couple Walking and Crescent Moon, although Vincent never specifically mentions it in his letters. Differences are evident: the trees are predominately olive, with a few cypresses in the background; the couple probably lovers (the man with a reddish beard, sometimes identified as a self-portrait); and the location more isolated. Isn’t the feeling and style similar, though, especially the strange, otherworldly sky? 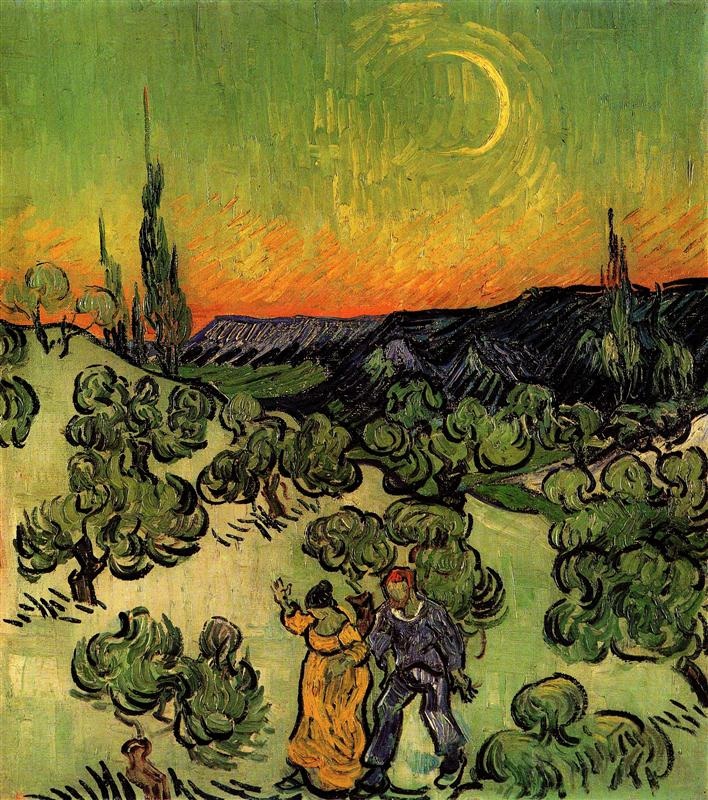 MEMORIES OF THE NORTH

Road with Cypress and Star and Landscape with Couple Walking and Crescent Moon also have in common figures representing what Vincent called his reminiscences of the North, nostalgic remembrances of everyday scenes in the Netherlands, where Vincent had lived until he was 33. He had done them mainly during the previous March and April at Saint-Remy, when he had been ill for an extended period.  Often sketchy drawings of pedestrians on the road, whether families, 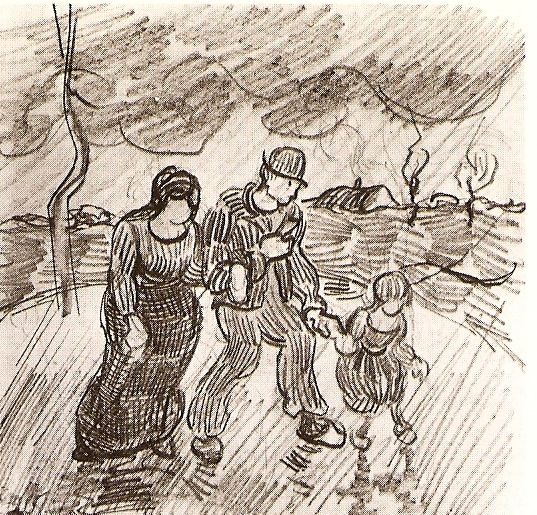 or men in conversation. Do you see the resemblance between the horse and carriage motif in Carriage with Two Figures on a Road, 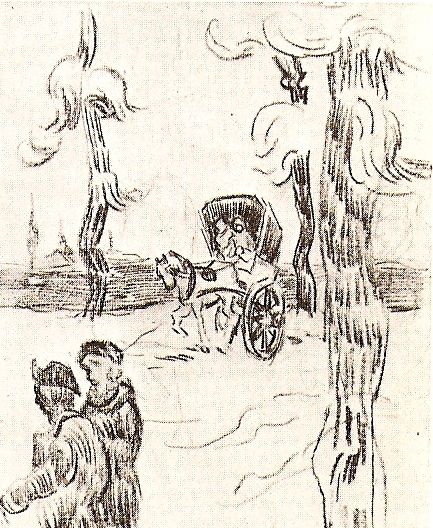 as well as in Road with Cypress and Star?

Why did Vincent wait until June 17, more than a month later, to reveal  the powerful Road with Cypress and Star to anyone?  In this case, Paul Gauguin would be honored with one of Vincent’s most poetic writings:

I still have a cypress with a star from down there, a last attempt—a night sky with a moon without radiance, the slender crescent barely emerging from the opaque shadow cast by the earth—one star with an exagggerated brilliiance, if you like, a soft brilliance of pink and green in the ultramarine sky, across which some clouds are hurrying.  Below, a road bordered with tall yellow canes, behind these the blue Alpines, an old inn with yellow lighted windows, and a very tall cypress, very straight, very somber. On the road, a yellow cart with a white horse in harness, and two late wayfarers.  Very romantic, if you like, but also Provence. I think.

The letter would never be sent, remaining among Vincent’s records.

Notice too that even though the general composition is the same, the houses and the late wayfarers do not match. 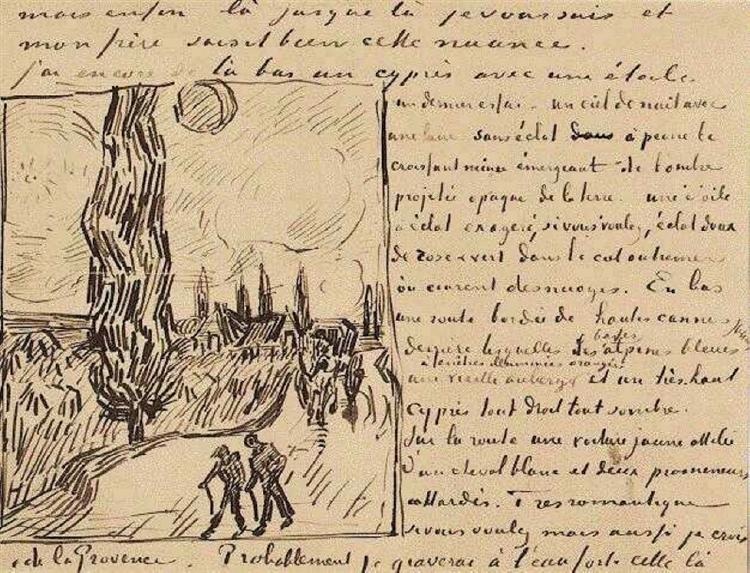 A possible explanation is that Road with Cypress and Star was still back in Saint-Remy, forcing Vincent to recreate it from memory.  But would his recollection have been so faulty? Or had Van Gogh decided to change it after the painting arrived in his new home in Auvers?  Substituting two upright walkers, only one now with a cane, who has a shovel as well like the workmen in an earlier drawing from March or April. 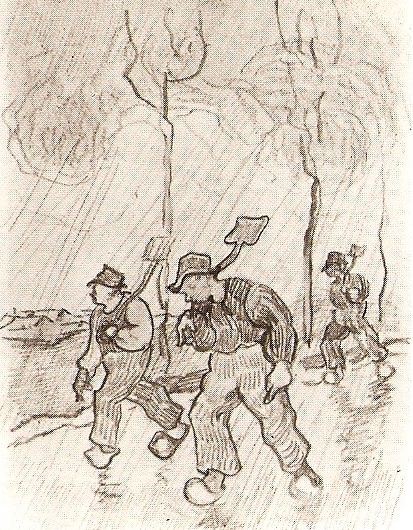 The old inn too is possibly derived from Thatched Cottages with Cypresses and Peasants, also from the March and April batch of drawings.  Doesn’t it look cozier than the more modern looking buildings shown in the letter? 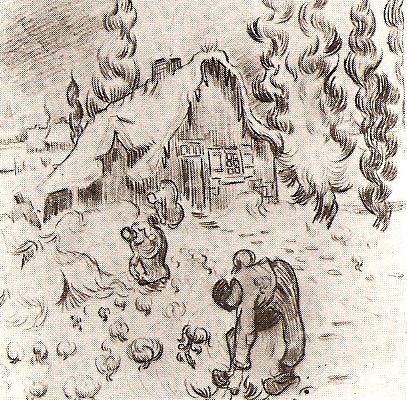 In 1980, more than three decades ago, the painting was x-rayed, discovering proof of some alterations.  However, the overall findings were ruled inconclusive.  Will further research and analysis of Road with Cypress and Star occur in the future?