Please click on the works of art to ENLARGE or ENHANCE them.

THE REAL GAUGUIN: FACT VS. FICTION, PART I

Is it possible to know the real Paul Gauguin?  Is he the self-proclaimed “civilized savage,” who impulsively deserted his family and business to pursue his vision of art? The cold-blooded womanizer, abandoning both French as well as Polynesian lovers?  Or the faithless friend of Vincent van Gogh, helping to drive the Dutch artist to madness? And finally the voyager to Tahiti, sailing for the first time to an exotic land where he discovers an ideal paradise?

This virtual exhibition will try to separate the man from the legend, presenting some often overlooked fast facts about Gauguin (1848-1903).

FAST FACT #1—-AROUND THE WORLD IN A LIFETIME

Gauguin spends his first  years in Peru, from about 1849 to 1854.  His journalist father had left France for Lima because of what were considered his radical political views.*  However, he dies en route.  His widow, daughter Marie and one year old Paul continue to Peru, where they live with family members. When Paul is 5 or 6, the three of them return to France.

Gauguin never forgets his experience in the South American country, and incorporates its art works (especially pre-Columbian pottery) into his paintings throughout his career.

Gauguin enlists in the French merchant navy when he is 17; for the next 6 years he travels across the globe.

Martinique and the Panama Canal

In April, 1887, Gauguin now an artist, embarks from the French port of Saint-Nazaire  with another painter Charles Laval, to work on the Panama Canal then under construction. Finds employment on the project as a laborer, but is laid off after only 15 days.  By July, both men have relocated to the Caribbean island of Martinique.  Although Gauguin is ill most of his three months stay, he manages to produce canvases like By the Seashore, capturing the lush tropical terrain and its native people, a prelude to Tahiti more than a decade later. 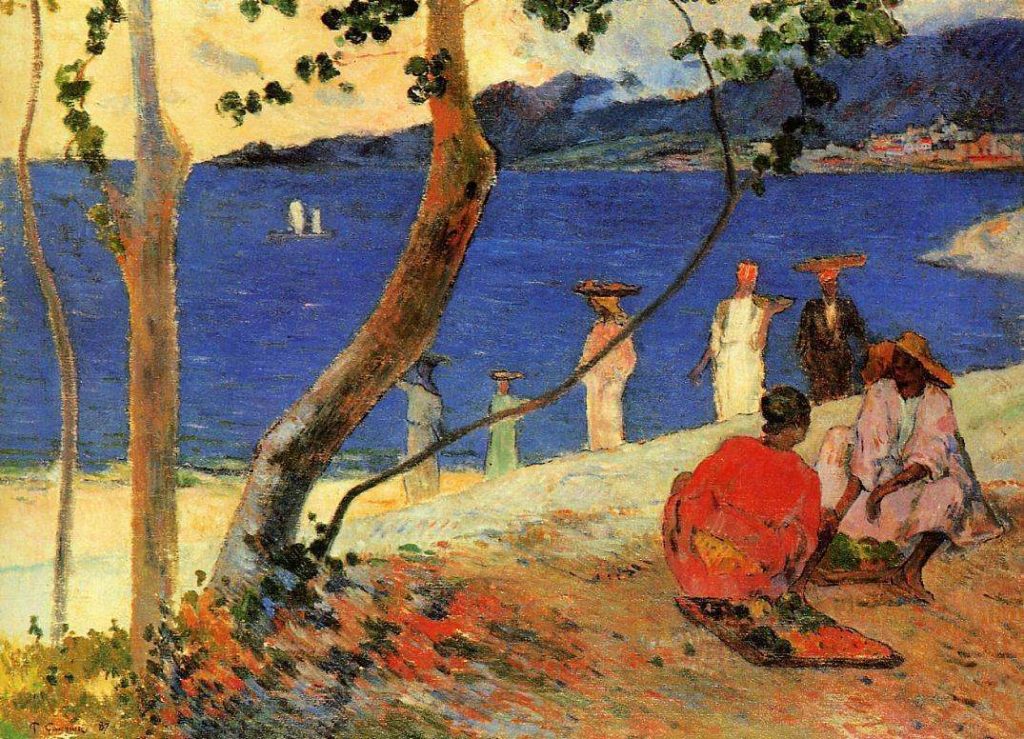 From 1872 to 1882, Paul Gauguin works  as a stockbroker in Paris.  By 1874, he has married Mette Gad from Copehagen and they quickly begin having children, adding to his financial responsibilities. But he also devotes his spare time to his artistic hobby, becoming what was known as a “Sunday painter.”  In 1876, he exhibits at the Salon, France’s official annual art display.

Pissarro and the Impressionists

Drawn increasingly into the creative milieu, Gauguin becomes friends with Camille Pissarro (1830-1903), one of the leaders of the Impressionist movement.  At the last minute, Gauguin is invited by the group to submit his work to their fourth exhibition of 1879; he would subsequently participate in the fifth, sixth, seventh, and eighth Impressionist shows. His atmospheric Winter Landscape is basically a result of  his close relationship with Pissarro during the late 1870s, when the two painted together in the countryside outside Paris. 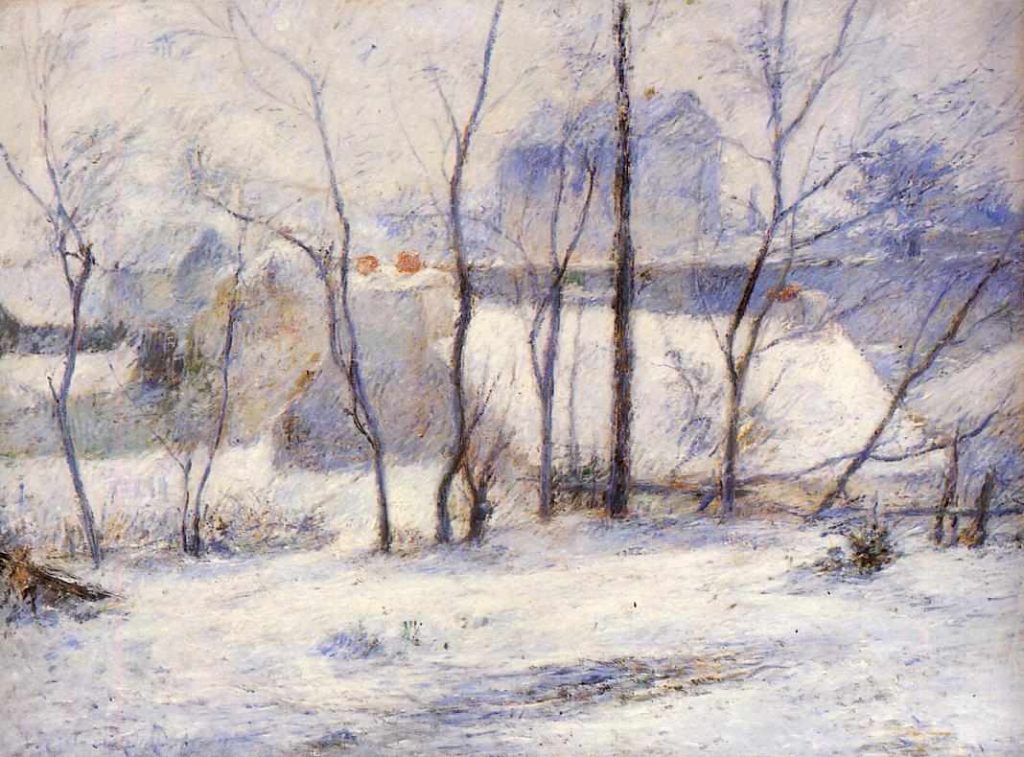 1882 is a turning point for Gauguin: the stock market crashes, impacting his decision to become a professional artist at 35.  Already earning some income from purchases of his paintings, Gauguin overestimates his ability to support Mette, his daughter and three sons (Paul, nicknamed Pola, would not be born until 1883). Soon he is forced to sell his own Impressionist collection as well as his life insurance policy at a loss.

Inevitably, the family is broken up. For a brief period starting in November 1884, the Gauguins reside in Copenhagen, initially with Mette’s parents, them move into an apartment. But Gaugin soon finds this arrangement unbearable and leaves for Paris, bringing along Clovis, whom lives with his father off and on for the next few years.  In 1887 Mette assumes permanent custody of Clovis, taking him back to Denmark where he joins his other siblings.

Clovis, born in 1879, must be about 7 in this engaging portrait dated 1886. Does he appear mature for his age?

Gauguin depicted Clovis’ older sister Aline too, beginning with this impressionistic interpretation circa 1877, created with a father’s love.

Did the artist ever see his children again after he separates from his wife in the mid-1880s?  He visits them at least once in Copenhagen in 1891, just before he departs for Tahiti.  And he does continue to correspond with Mette until 1897, when all communication ceases, after the death from pneumonia of Aline.

The versatile Gauguin creates numerous sculptures in a variety of media including wood, clay, and marble. In The Singer, which debuted in the Impressionist exhibition of 1881, the viewer can actually feel the strength of his hand carving into the hard surface, as the haunting figure effortlessly emerges from her medallion-like cocoon.

While in Still Life with Profile of Laval,  the only record of a rather unusually shaped object by Gauguin is in paint.

Gauguin most likely prided himself on his amorous conquests, always eager to add another name to the growing list. However, teenage Madeleine Bernard successfully resists his advances. The two meet at Pont-Aven in Brittany in 1888 where her brother painter Emile Bernard (1868-1941) and Gauguin are collaborating on what will be called the Symbolist style.  More than half  Gauguin’s age, she prefers twenties-something Charles Laval (Gauguin’s companion in Panama and Martinique, and pictured in the work above).

She does consent to model for Gauguin, yet, is she rather uncomfortable in his presence?  Or simply being coy?

In spite of Madeleine’s rejection of him, Gauguin admires her intelligence and character. He writes her later that she should be independent of men, developing herself as a person and earn her own income.  Madeleine, though, lives only until 24.  She becomes the fiancee of Laval, who succumbs to tuberculosis.  Then in 1894, she contracts the same disease and, like Laval, does not survive. 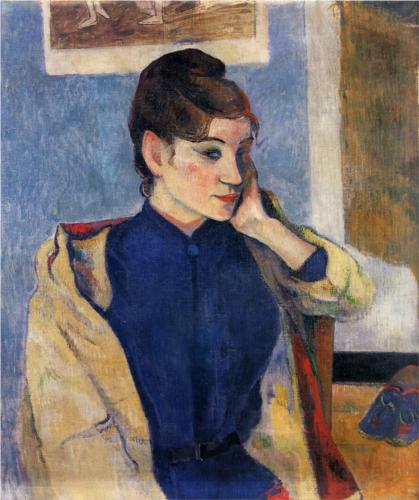 GAUGUIN IN TAHITI COMING WEDNESDAY: PART II OF THE REAL GAUGUIN–FACT VS. FICTION

The main resources for this blog are The Art of Paul Gauguin (catalog of exhibition) by Richard Brettell and other art historians, published by the National Gallery of Art, Washington, D.C. and The Art Institute of Chicago, Chicago, Illinois, 1988 and Gauguin by Michael Howard, published by Dorling  Kindersley, in association with The Musee Gauguin, Tahiti, New York, 1992.

Expand your horizons and explore the world of art with Through an Artist’s Eyes: Learning to Live Creatively!