Click on the work of art to enhance or enlarge it.

INSIDE THE ART MUSEUM, PART III

RENOIR AND THE SENATOR’S DAUGHTER

If you read my blog on Wednesday (See: Inside the Museum, Monet’s Forgotten Painting?), you might have already met, if indirectly, the senator’s daughter.  She’s the subject of the popular Girl with a Hoop by Pierre-Auguste Renoir, shown below with another fan at the National Gallery of Art.  What could be more appropriate then to have the portrait of a politician’s child hung just down the street from the U.S. Capitol in Washington, D.C. 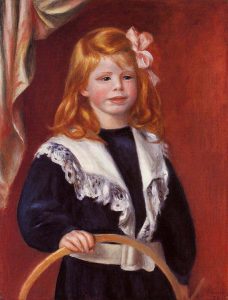 Except that the father Etienne Goujon was a member of the French Senate more than a century ago.  In 1885, he commissioned the Impressionist artist to immortalize his young children in paint, including 9 year old Marie who seems to be a hit with the general public today (at least during one of my trips to the Impressionist wing).

I often wonder about the fate of this doe-eyed girl in the silky blue dress, with its daringly brushed sash (a work of art in itself).  According to the provenance records of the art museum, her husband sold the portrait in 1920 to a dealer.  Why?  Had she already died by that date?  Or was he desperate for money? Because shortly afterward, Girl with a Hoop, was purchased by Marquis de Rochecouste.

Next Max Silberberg. a German Jewish industrialist acquired the painting sometime before 1931. When the Nazis took power, Silberberg would be forced to sell his valuable collection of Van Gogh, Degas, Pissarro, Renoir and other prized artists for almost nothing; later, in 1945, he died, a victim of the Holocaust. However, he sold Girl with a Hoop in the early 1930s;  ultimately, it became part of Chester Dale’s holdings and was donated by the philanthropist to the National Gallery of Art in 1963. 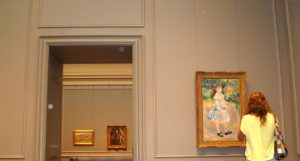 And where are Marie Goujon’s siblings today?  Her brother Etienne, aged 5, for example, still poses in the family garden in Child with a Whip, presently at the  State Hermitage Museum in St. Petersburg. In the late 19th century, small boys often wore feminine attire; their hair too would remain long until they entered school.  At least Etienne’s tiny toy whip might be considered a symbol of masculinity. 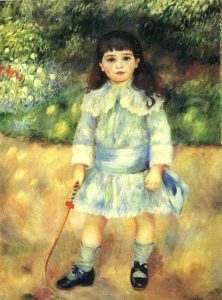 Just click on the following link, to view Girl with a Hoop through the artist’s eyes.  Hit the image once, and you’ll go to the next page.  Click + to enlarge the image for details.

Girl with a Hoop

Highlights of the works of Vermeer, Rembrandt, Monet, O’Keeffe, Warhol, among others are featured in Through an Artist’s Eyes: Learning to Live Creatively!