Click on the works of art to enlarge or enhance it.

MONET & THE SEINE, PART II: A FAREWELL TO PARADISE

Claude Monet (1840-1926) settled in Argenteuil in 1871 on the advice of his friend and colleague Edouard Manet, renting a house easily accessible to the Seine (see: Discovering Paradise, Part I).  Living expenses were cheaper than in Paris, although Argenteuil was only a 15 minute train ride away.  Monet did continue to meet with his fellow Impressionists in the city to plan their group exhibitions; his agent Paul Durand-Ruel and potential buyers  were probably also on his appointment list on these trips.

Monet’s garden was always waiting for him when he returned to Argenteuil, weary from the noise and congestion of Paris.  In The Artist’s Garden in Argenteuil, for example, done in 1873, the artist invites us into his private corner of paradise at its height, blooming freely in a spectrum of  colors.  Can you almost pick the flowers with your imagination, actually feeling the texture of the artist’s brushstrokes.

While in Camille and Jean in the Garden at Argenteuil, Monet’s wife poses good-naturedly for her husband, in front of another lush section of the artist’s backyard. Adorned with a red blossom, she rises like a goddess from the domesticated jungle of bushes and trees, Their son Jean joins his mother too, almost camouflaged in the undergrowth.

Claude Monet, Camille and Jean Monet in the Garden at Argenteuil, 1873, oil on canvas, Private Collection

For Camille is rarely absent from their garden, at least  on canvas, appearing in several works on this subject during Monet’s six years at Argenteuil. Manet and Renoir also immortalized Camille (along with Jean), setting up their easels on the couple’s lawn one sunny afternoon in 1874 during a visit from Paris. The result was two major paintings: Renoir’s Madame Monet and Her Son at the National Gallery of Art, Washington, D.C. and Manet’s The Monet Family in their Garden at Argenteuil in the Metropolitan Museum of Art which is displayed below.

However, Manet unlike Renoir, has included Monet himself about to water his cherished plants (with a glimpse of  the family chickens as well).

Edouard Manet, The Monet Family in the Garden at Argenteuil, 1874, oil on canvas, Metropolitan Museum of Art, New York

Unfortunately, beyond Monet’s garden walls, Argenteuil was changing.  In Lane in the Vineyards at Argenteuil, for example, signs of industrialization are already apparent in the artist’s bleak record of the enviornmental decline of the countryside.

Claude Monet, Lane in the Vineyards at Argenteuil, 1872, oil on canvas, Private Collection

Yet, only a short walk away, the open fields still await us under a heaven of billowy clouds. 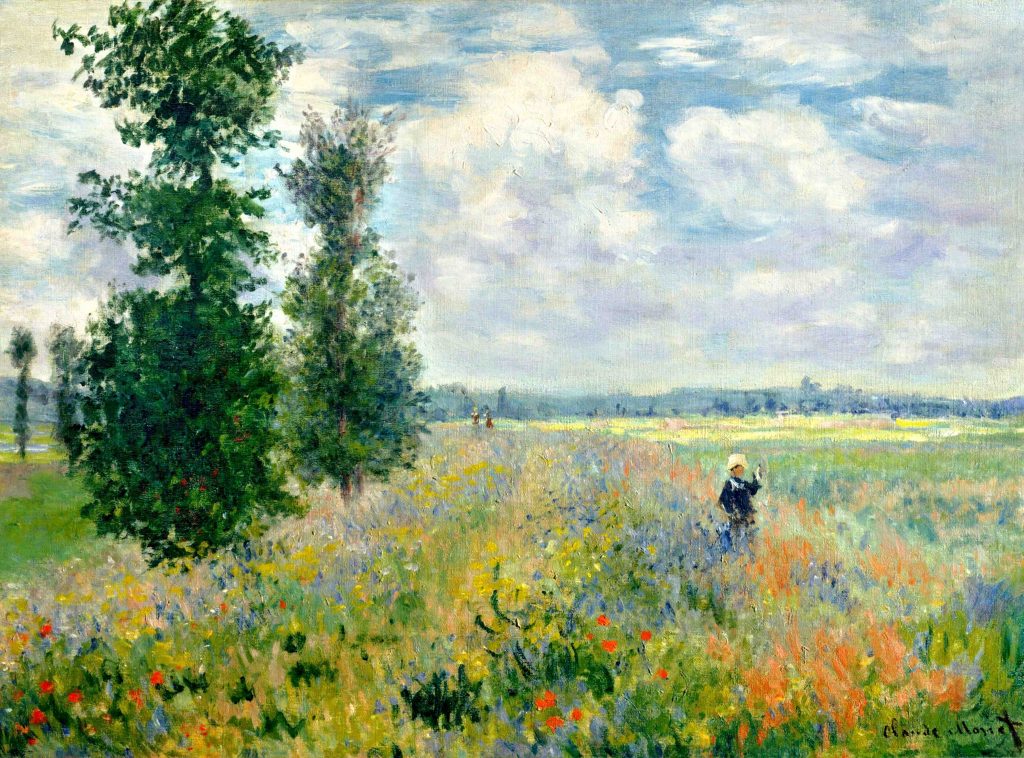 Where in Walk in the Meadow at Argenteuil, Jean emerges from a sea of orange and red poppies. Could that be Camille with a parasol on the upper level, almost on the edge of the painting? 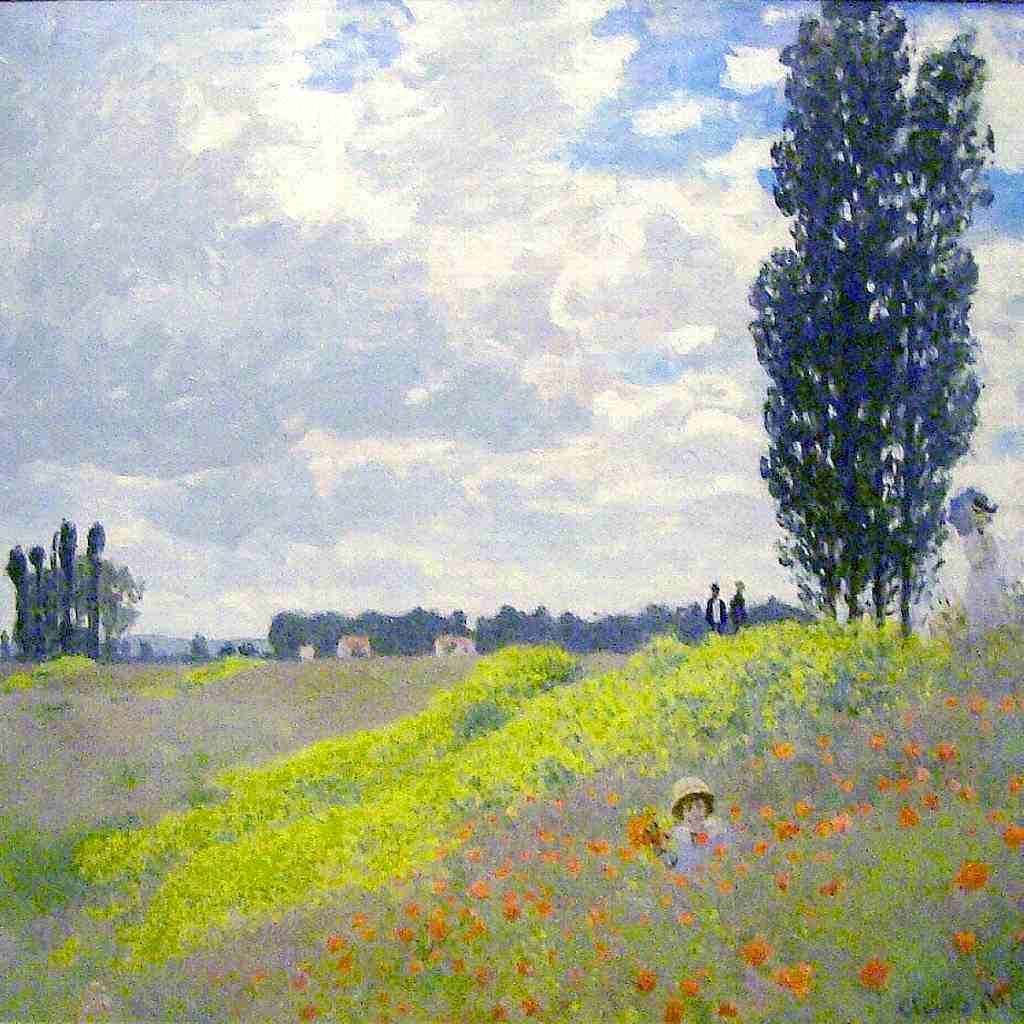 Claude Monet, Walk in the Meadow at Argenteuil, 1873, oil on canvas, Private Collection

Camille, though, is definitely the centerpiece of In the Meadow. surrounded by a panorama of daisies and other wildflowers. Exquisitely dressed in a fashionable hat and gown, isn’t she the rival of any her floral companions?

But Argenteuil kept growing, invaded by chemical factories and iron works polluting its water and atmosphere. So Monet would be forced to leave in 1878 for the less developed Vetheuil which was farther from Paris. Argenteuil, Flowers by the Riverbank, one of Monet’s final works done in the town, is really an adieu, a farewell to what is often considered the zenith of the Impressionist movement.   .

The main resource for this blog is River of Light: Monet’s Impressions of the Seine by Douglas Skeggs, published by Gollancz, London, 1987.