Note:  Please click each image to enlarge the individual work of art.

Caravaggio is considered one of the major artists of Western art.  Born either in or near Milan, Italy, possibly sometime in late September, 1571, he was a pioneer of Baroque art, creating a style that would inspire geniuses like Rubens, Rembrandt and other painters for generations.* His works of art are easy to recognize, marked by a dramatic contrast of light and shadow, rivaling any theatrical production.  The subjects, from the lowliest peasant to Christ, are spotlighted like actors in mainly religious scenes. 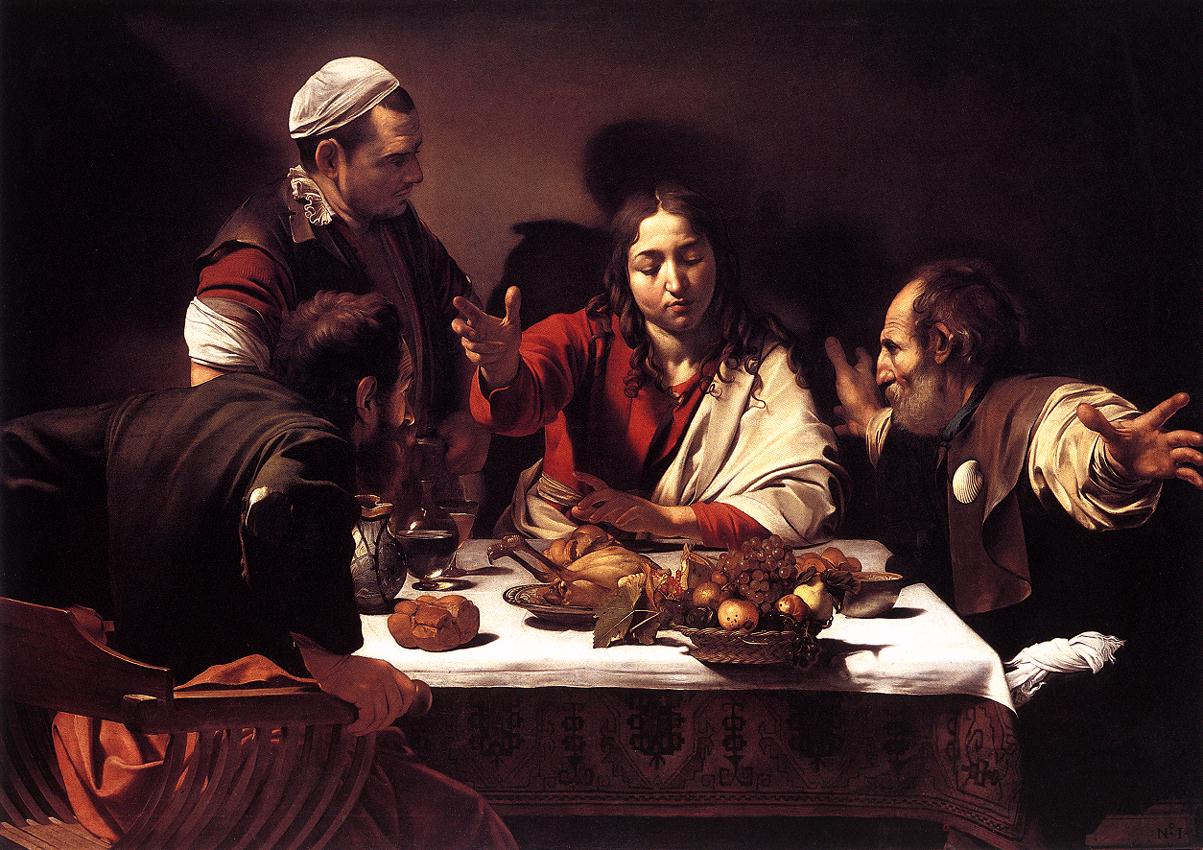 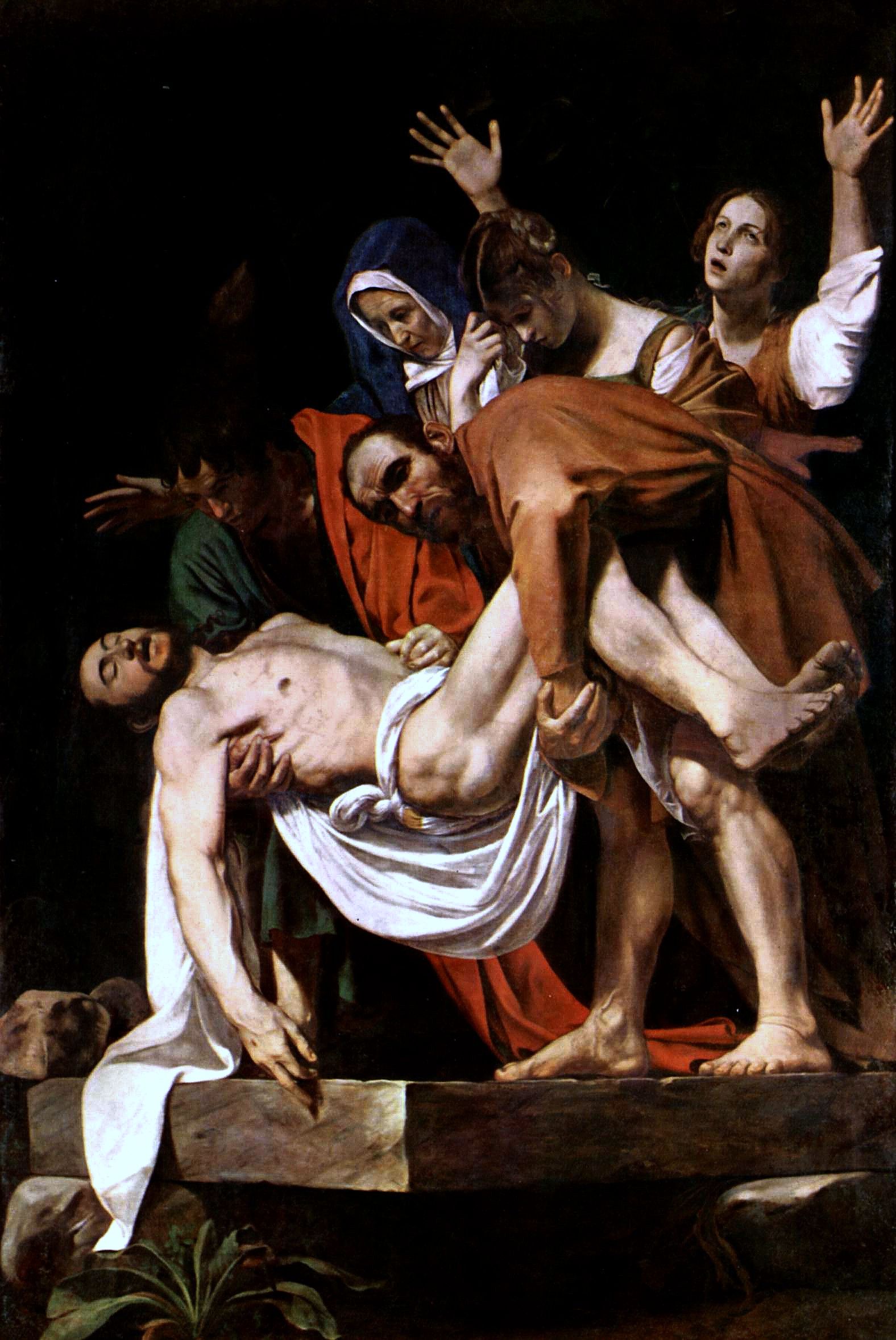 Caravaggio was also a murderer.  In 1606, in Rome, he killed Rannucio Tomassoni over a tennis match.  All the details are not clear; it likely was caused by allegations of cheating about a bet.  But Caravaggio had a long police record of assaults, brawls, carrying an unlawful weapon, and insulting fellow Romans (including women).

Where did he get the time?   Because Caravaggio, in spite of his criminal activities,  had attained fame in the capital of Christendom, completing a considerable body of work including  the still startling The Calling of St. Matthew of the Contarelli Chapel. 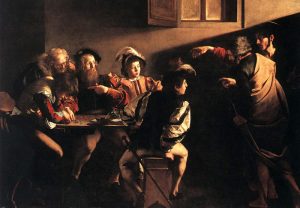 It seems, though, that the creative process was not enough for the thirty five year old artist.  According to his contemporary, Karl Van Mander in 1603:

…he doesn’t study his art constantly, so that when he’s worked for a fortnight he goes out for a couple of months at a time with his rapier at his side and a servant behind him, moving from one tennis court to another, and always looking for fights or arguments, so he’s impossible to get on with.  Which is all quite incompatible with our art….

So then what drove Caravaggio  to commit the ultimate act of violence that forced him to flee Rome or face the punishment of beheading? Why did he destroy his successful career, and condemn himself to years of exile in a succession of cities: Naples, Malta, Palermo,Syracuse, and Messina?

Art historians and other writers have attempted to solve the enigma of Caravaggio  Do the artist’s self portraits, scattered throughout his masterpieces, offer a clue or two?  However, Caravaggio never reveals himself directly.  Instead he  represents himself as a mythological, religious, or other type of character.

For instance, what is the meaning of his early self-portrait that appears in the lyrical The Musicians, done about 1595 while he was under the patronage of wealthy Roman Cardinal Del Monte?  Caravaggio  the third figure on our right, seems initially to be a secondary figure, especially compared to the handsome boy playing a lute. Yet, on closer view, is Caravaggio trying to communicate with us from the shadows?  If so, can you decipher the message? 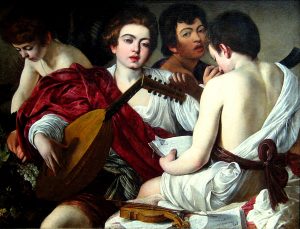 However, in Self Portrait as Bacchus or The Sick Bacchus, painted just a year or so before, Caravaggio is the main subject, symbolizing the god of wine and revelry.  Except  he doesn’t seem very divine, obviously suffering from ill health.  Or maybe a  hangover?  Or is the source of his overall dissipation much deeper? 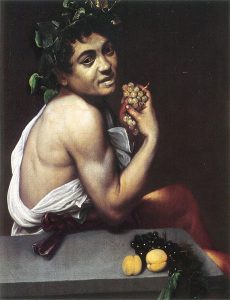 While in the monumental work, The Martyrdom of St. Matthew, the partner of The Calling of St. Matthew in the Contarelli Chapel, Caravaggio has now depicted himself as a witness to the murder of a saint.  For he stands farthest from the act of slaughter, to the left of St. Matthew’s merciless executioner.  Can you determine his expression in spite of the surrounding darkness? 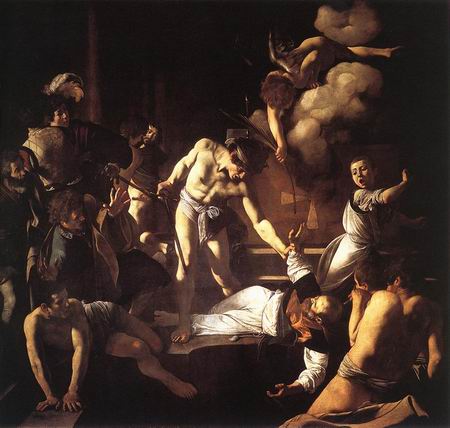 Is his reaction, when seen close-up, actually of regret?  Or even helplessness?

The Martyrdom of St. Matthew, detail

Caravaggio’s final self-portrayal, David with the Head of Goliath, was possibly done the year of his death in 1610, although it has been dated as early as 1606.  But it is generally agreed that the severed head of the Philistine giant is Caravaggio whose features are contorted in convulsions of pain. Why would any artist depict himself in such agony? 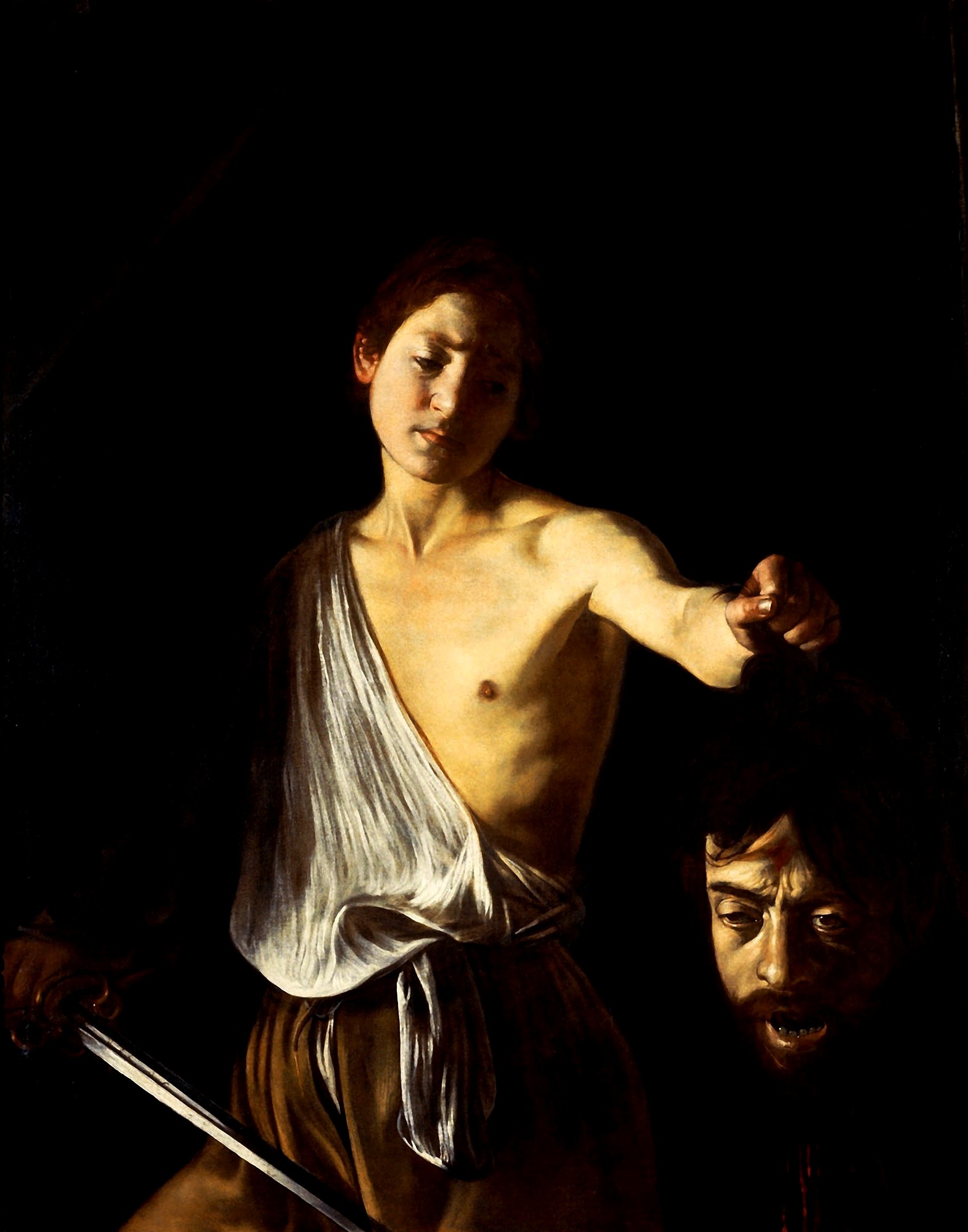 Was Caravaggio, as some scholars speculate, asking for forgiveness from  the powerful Cardinal Borghese in Rome? That he gave this painting of his suffering as a gift to the influential churchman, who in turn might convince the pope to grant the desperate artist a pardon?

Caravaggio, though, would never see Rome again.  In July, 1610, he died alone in Porto Ercole in Tuscany, reportedly on his way back to the city.  Was cholera the cause?  Or the effects of a recent brutal attack in Naples?  Or was he finally assassinated by one of his  numerous enemies?

Yet, did even Caravaggio deserve such a sad end?

*The exact date of Caravaggio’s birth is presently unknown.

Discover the paintings of another Italian master.  Take a grand tour of Venice with Canaletto by  exploring our blog, The Art of Travel: Through an Artist’s Eyes, March 19, 2011.

All of the above images are utilized solely for educational purposes.

Through an Artist’s Eyes: Matisse in My Backyard
The President’s Art Gallery: Highlights of the White House Art Collection