Please click on the photos and works of art to enlarge or enhance them.

Animals in Art is the theme this week.  So I thought I would “revive” a blog I did on Andy Warhol’s birthday in 2011, celebrating his Amazing Cats!

Andy Warhol would have been 83 today, or at least we think so. Warhol, ever the enigma and a bit of a practical joker, gave several birthdays over the years.   However, even Warhol couldn’t make his birth certificate disappear; its official date of August 6, 1928 is accepted by most art historians.

Then again, can we really be certain? 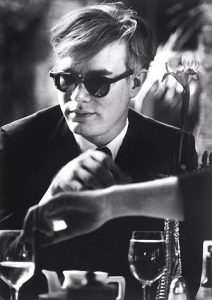 It is indisputable that Warhol had a major influence on the American art world for some 25 years, from the early 1960s to his premature death in 1987 (a result of negligent care after a gall bladder operation).  He is perhaps best known as the king of Pop Art and the originator of such works as Campbell’s Soup Can, his ode to both the genius and banality of modern advertising.

Marilyn Monroe was another favorite subject of the celebrity obsessed Warhol; transforming her and other movie stars into icons that hypnotize and repulse us at the same time.

Warhol later created his own “superstars” in films produced in the Factory, his warehouse studio in Manhattan.  Although not household names today, Baby Jane Holzer, Edie Sedgwick, Viva, and Ultra Violet, among others, were probably better known for their eccentric and at times bizarre behavior than their acting skills.  Ironically, in 1968, Warhol was shot by an aspiring screenplay writer, feminist Valerie Solanas.  He nearly died of his wounds and suffered constant pain for almost twenty years.

By that time, Warhol had become a cultural symbol, renowned for his comments on contemporary society, especially the mass media. “In the future, everyone will be famous for fifteen minutes” still resonates in the early twentieth first century.

Did you know, though, that Warhol worshiped cats?  A love he shared with his mother, Julia Warhola, whom he lived with most of his life.   She was an immigrant from what is now Slovakia, with little education, but was artistic in her own right.   She encouraged her youngest child Andrew to draw when he was a small boy, ultimately providing the means of escape from the poor Pittsburgh neighborhood where the family lived.  For as soon as the 20 year old Warhol graduated from the School of Fine Arts at the Carnegie Institute of Technology in 1949, he moved to New York.

Warhol’s widowed mother decided to follow him (reportedly uninvited) within a couple of years after his departure.  During the next decade of the 1950s, she was a witness to the increasing success of her son as a commercial artist. However, it is said that he generally kept her presence a secret, relegating her to a basement apartment in their townhouse.

Yet, Warhol  must have respected her creativity.  In 1954, she contributed to her son’s whimsical 25 Cats Name Sam and One Blue Pussy, providing the  calligraphy that accompanied each cat.

You can see her decorative script, especially on the front cover.  Do you notice the misspelling of name, minus the ‘d,’ above the reclining Sam?

It was a private production intended as gifts for Warhol’s clients, totaling less than 200 copies.  Was there perhaps some confusion when the honored recipients counted only 16 Sams? 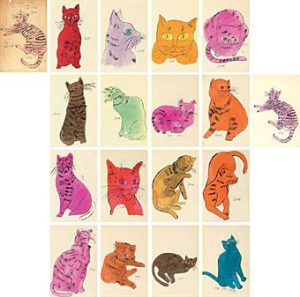 Why the discrepancy between the title and the actual number?  Perhaps because Sam has 25 different moods?  He may possess nine lives, but he displays an infinity of personalities that it is up to each viewer to decipher. For instance, is he a confident feline, at least with his master?  Direct in his gaze and unafraid?

Always a gentleman, sensitive and intelligent,

Of good nature and happy to please. 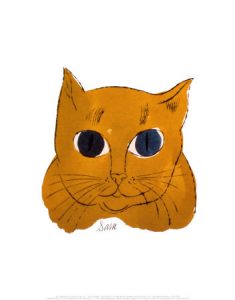 Except for when his owner has misbehaved. 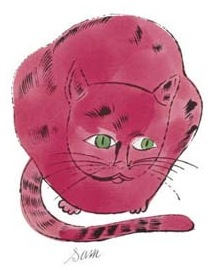 Whom Sam is quick to forgive. 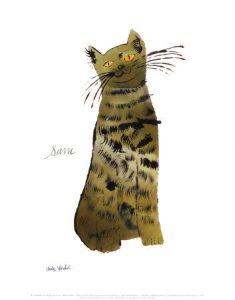 He is forever immaculate, 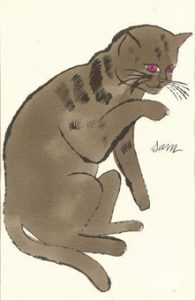 Appearing in many guises and sizes, from sleek, 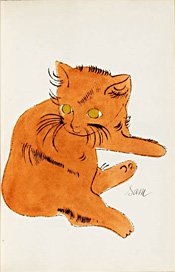 The perfect partner for a certain lady in bright blue!

Discover more about Andy Warhol in Through an Artist’s Eyes: Learning to Live Creatively.