I discovered Matisse in the backyard the other morning—in my hanging planter of geraniums. I’ve been nurturing them since June and now they are blossoming, another cluster of buds opening every day.

You may enhance some of the images by clicking on them. 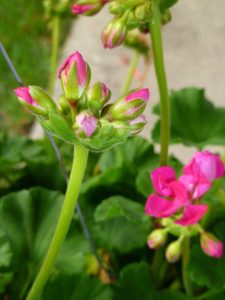 They are a brilliant pink, a color the French modern master Henri Matisse (1869-1954)  could have invented.  Even the leaves, that we might tend to overlook, are a rich green, their curving forms full of movement and energy.  A masterpiece created by nature’s genius waiting for me on my back porch.

But I would have never comprehended this miracle without the guidance of Matisse.  “Slowly I discovered the secret of my art,” he once said, “It consists of a meditation on nature, on the expression of a dream which is always inspired by reality.” *

Most importantly, Matisse had to feel his subject, for his purpose in creating a painting was to communicate his emotions. In an interview with  journalist Clara T. MacChesney  in 1912, he shared his expressive process.

“Well,  take that table, for example,” pointing to one near by, on which stood a jar of nasturtiums.  “I do not literally paint that table, but the emotion it produces upon me.”**

Or what Matisse also described as a “condensation of sensations.”  I, for instance, can take multiple photographs of my planter of geraniums.  But Matisse had only one opportunity to express the power of his sensations through a work of art.

Flowers were a continuous source of inspiration during Matisse’s long career of some 60 years, whether elegant roses, exotic calla lilies, or lively anemones, However, geraniums were a favorite floral model when he was in his thirties.  They are likely included in the rather jumbled display of pots in The Open Window of 1905, considered representative of Matisse’s Fauve period when he shocked Paris with what were then daring colors.

Yet, only a year later in 1906, he painted the more subdued, Still Life with a Geranium.

Matisse, Still Life with a Geranium, 1906, oil on canvas, Art Institute of Chicago

By 1910, his pots of geraniums are surrounded by elaborate patterns and designs, from the vibrant Still Life with Geraniums, 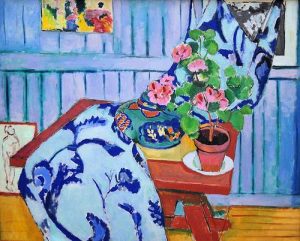 to Seville Still Life, obviously reflecting a recent trip to Spain.   Is it a bit difficult to find the flowers? 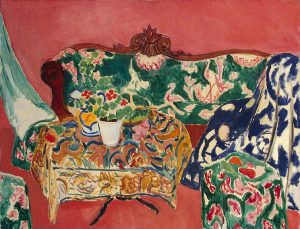 Finally in Pot of Geraniums of 1912, Matisse portrays just a solitary geranium that speaks directly to me.  Is it perhaps the combination of humbleness and resilience that is so touching?  Geraniums are such sturdy flowers, withstanding the extreme heat and heavy rains of summer that doom more fragile plants.

So can’t we all create our own works of art, if not with a brushstroke, then with our mind and emotions? For are we not “artist-gardeners,” as I write in my book, Through an Artist’s Eyes: Learning to Live Creatively, cultivating our appreciation of life?

The images above are used solely for educational purposes. Click on each image to enlarge the work of art.

COMING NEXT:  CELEBRATE ANDY WARHOL’S BIRTHDAY ON AUGUST 6!   AND HAVE A BOWL OF CAMPBELL SOUP!