Have you discovered the art of travel?  The creative journey to your choice of destinations through your own  imagination?  A unique tour that requires no ticket, passport or expensive itinerary.  However, you will need a personal guide—in this case, Giovanni Antonio Canal, called Canaletto. 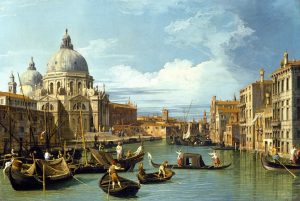 Canaletto’s name may not be as familiar to you as Renoir or Picasso. But he had the good fortune to be born in Venice, the ultimate romantic escape. Monet, Turner, Whistler, John Singer Sargent, among hundreds of other artists, were drawn to the magical beauty of the island city.  Yet they were visitors while Caneletto (1697-1768) was a native son, producing his extraordinary vedute or views of often dazzling color and light during the waning days of  the Venetian Republic in the eighteenth century.  He captured his home and its people, not only the churches and palaces, piazzas and canals, but the festivals and celebrations beloved by his fellow Venetians.

So let’s begin by boarding a gondola and head for Venice’s bacino or inner harbor.  Venice is in the distance in this painting by Canaletto, although you can glimpse some of the city’s famous landmarks including the monumental Renaissance church San Giorgio Maggiore in the background on your right. 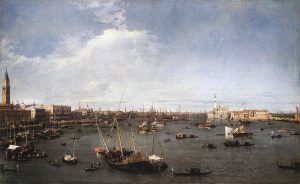 The famed cityscape becomes clearer as we move closer.  It is Ascension Day, the most important Venetian holiday, as depicted by Canaletto sometime in the late 1730s.  Look to your immediate right, and you’ll see the pink facade of the  Doge’s Palace and the impressive  Campanile or bell tower, both buildings still dominating the Venetian skyline today.

In another interpretation of Ascension Day by Canaletto, we are almost on terra firma as we approach the Molo, the stone quay along the waterfront where many visitors start their Venetian adventure.  The Basilica of San Marco awaits you, just behind the Doge’s Palace.

Canaletto, Molo from Bacino di San Marco, Ascension Day, about 1733-4, Lent by Her Majesty the Queen

Next, we are  in the heart of the city, the Piazza San Marco, where both Venetians and tourists have congregated for centuries. The multi- domed Basilica of San Marco, dating from Byzantine times, gleams in the full sunlight.  Adjacent to it, stands the Doge’s Palace, decorated with rows of pointed Gothic arches, a memory of the medieval era.

Move back a couple of steps and stretch your neck to appreciate the soaring height of the Campanile which has survied an earthquake and general collapse.

Explore the other squares of  Venice such as the Campo Santi Givanni e Paolo, named after the church on your right, in which twenty five doges (the city’s rulers) are buried.    However, this work of art was created by Bernardo Bellotto (1722-1780), Canelleto’s talented nephew who trained under his famous uncle and began his own artistic career at the precocious age of 16.

Or you can spend a couple of hours in another corner of the city, the Campo Santa Maria Formosa, also portrayed by Bernardo Bellotto.

Would you now like to travel up the Grand Canal, the main waterway of Venice spanned by the unforgettable Rialto Bridge which, until the 1850s, provided the only pedestrian route across the water?  Although Canaletto painted his own views of the Rialto Bridge, this interpretation of the distinctive structure is by an artistic rival of Canaletto, Michele Marieschi (1710-1743), who lived only into his early thirties.

Michele Marieschi, Rialto Bridge from the South, about 1736, Philadelphia Museum of Art

You might want to watch one of Vencie’s exciting regattas at another point along the Grand Canal.  These gondola races continue to be held long after Canaletto’s day.

Canaletto, Regatta on the Grand Canal, about 1733-4, Collection of Her Majesty the Queen

However, it’s time to return to the beginning of your journey.  Remember the Molo?  Here’s a different perspective, looking toward another jewel of the city, the Baroque church of Santa Maria della Salute, its elegant domed structure enhanced by the rosy tones of the Venetian sky.

Van Gogh’s Neighborhood: On the Street Where He Lived
Monet’s Water Lilies: The Healing of a Nation, Post-Paris Attack