THE ART OF THE MISSING: LOSS AND HOPE, PART II

In my previous blog on The Art of the Missing: Loss and Hope (see: Monday, October 6), I focused on Monet and two paintings that disappeared during World War II, one permanently lost and the other currently on the Monuments Men Most Wanted Works of Art list. Today’s blog is more positive, offering some hope in the aftermath of a world-wide conflict that continues to haunt us after more than 70 years.

(Note: the quality of some of the reproductions has been affected because of the paintings’ disappearance.)

I look differently nowadays, in so far as I no longer have either hair or beard, both being always shaved off close; further my complexion has changed from green-grey pink to grey-orange, and I have a white suit instead of a blue one, and am always dusty, always more laden like a porcupine with sticks, easel, canvas, and other merchandise.

Of the some 30 self-portraits by Van Gogh, The Painter on the Road to Tarascon, created in Arles during the summer of 1888, is the most unique.  Instead of the usual studio portrait, Vincent depicts himself striding across the hot landscape of southern France, overloaded with the tools of his artistry.  He also, as he informs his sister in the excerpt above, is minus his beard, although because of the poor quality of the reproduction below, you might not be able to detect that detail.  Look, too, at the distinctive shadow that seems to be following Vincent as he pursues his creative mission. 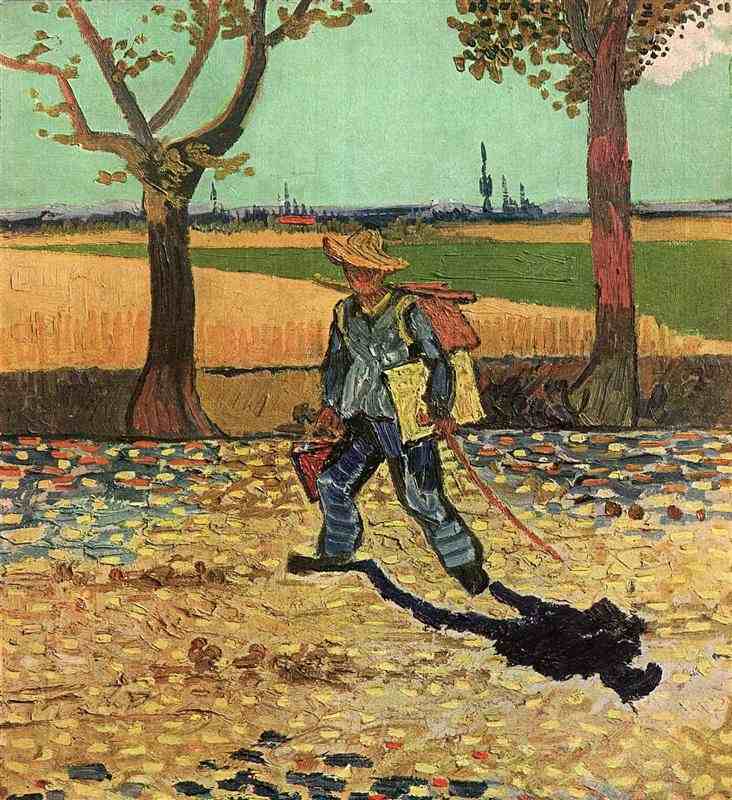 Vincent van Gogh, The Painter on the Road to Tarascon, 1888, oil on canvas, reportedly destroyed during World War II

Vincent in his letter to Willemien doesn’t mention any specific painting connected to the colorful summary of his appearance.  However, around August 14, he writes to his brother Theo of a rough sketch I made of myself laden with boxes, props, and canvases on the sunny road to Tarascon.

I’ve found The Painter on the Road to Tarascon illustrated in a number of Van Gogh biographies, always described as destroyed during World War II.  Here is an example from Van Gogh by Rainer Metzger and Ingo F. Walther, published in 1998.

Is  it truly gone forever, incinerated in a wartime bombing of the Kaiser-Friedrich Museum in Germany?  The museum, renamed the Bode Museum, still exists in Magdeburg ; I wasn’t able to find information regarding whether it had undergone any damage during World War II. Yet according to the Monuments Men Most Wanted Works website, The Painter on the Road to Tarascon was actually stored in a salt mine and last seen on April 12, 1945. To view, click:

So is there a chance for its recovery?  Was Van Gogh’s self portrait perhaps stolen rather than burned?  Will it miraculously surface again like the second painting to be spotlighted today?

THE RETUN OF COUNT LEPIC

….I prefer the omnibus.  One can look at people.  We are made for looking at each other, after all.

Edgar Degas (1834-1917) is probably best known for his scenes of the ballet and horse racing, but he was also a Parisian, familiar with the daily life of his native city. In Place de la Concorde executed around 1875, he takes us right into the heart of the metropolis and its most famous plaza. Do you feel as if you are strolling along with Viscount Ludovic Lepic, the jaunty, cigar smoking gentleman with the umbrella? His children, though, seem to be somewhat disconnected from their father.  Attired in what appear to be matching outfits, they both are facing in the opposite direction; the dog, too, assumes a similar stance. Are they bored? Or, in the case of the daughter on our far right, a bit disgruntled?

Perhaps Degas is suggesting Lepic’s psychological isolation, contradicting his comment quoted above that we are made for looking at each other, after all.  The artist was a friend of  his models, and probably had some insight into the family dynamics. The descendant of one of Napoleon’s general, Lepic prided himself on being an aristocrat, perhaps turning his back on his social inferiors, such as the more humbly dressed figure on our left.  Does this unidentified man appear to be almost intimidated, hesitating to venture into Lepic’s space?

However, Lepic was an artist as well, participatingin the first and second Impressionist exhibitions.  In addition, he bred pedigree dogs and helped Degas choose a puppy for Mary Cassatt.

For half a century, Place de la Concorde (Viscount Lepic and his Daughters Crossing the Place de la Concorde) was counted among the casualties of World War II, accessible only as a black and white illustration in art books. Although in the 1973 edition of John Rewald’s classic The History of Impressionism, “apparently” is inserted next to “destroyed” as seen below.  Was the author, considered the foremost authority of 19th century art, not entirely convinced of the painting’s demise?

Rewald died in 1994, just one year before Russia’s Hermitage State Museum revealed in an epic exhibition Place de la Concorde and 73 other Impressionist and and Post-Impressionist period works that had been hidden by the former Communist government.  Taken by the Soviets from  a defeated Germany in 1945, all except one, were looted from the estate of private collectors like Otto Gerstenberg, who owned Degas’ depiction of the Lepics.

Count Lepic has attracted other thieves recently. For Degas painted him at least two other times, including Ludovic Lepic and His Daughters done around 1870, a few years before Place de la Concorde.  Part of the E.G. Buhrle Collection in Zurich, Switzerland, this  portrait was stolen in 2008 from the museum and not recovered until 2012.

The resources consulted for this blog include: Hidden Treasures Revealed by Albert Kostenevich, published by The State Hermitage Museum in association with Harry N. Abrams, Inc., Publishers, St. Petersburg, Russia and New York, USA, 1995 and The History of Impressionism by John Rewald, The Museum of Modern Art, New York, 1973 and 1980.