For my Live and Learn class.

Aline Charigot was only in her early twenties when Renoir so lovingly portrayed her in The Luncheon of the Boating Party (1880-1881) and he was most likely already smitten with the young seamstress from Paris. In fact, did the artist sense, as sometimes happens, that Aline was to become the center of his life?

For soon she would be gracing Renoir’s other works of art celebrating his favorite theme, joie de vivre or the joy of living. For example in Dance in the Country, painted in 1883, she dares to dance with another man (identified as Paul Lhote who is flirting with the actress Jeanne Samary in The Luncheon of the Boating Party).  Was Renoir just a bit jealous?

Although Renoir has Aline’s full attention in the alluring By the Seashore done also in 1883. 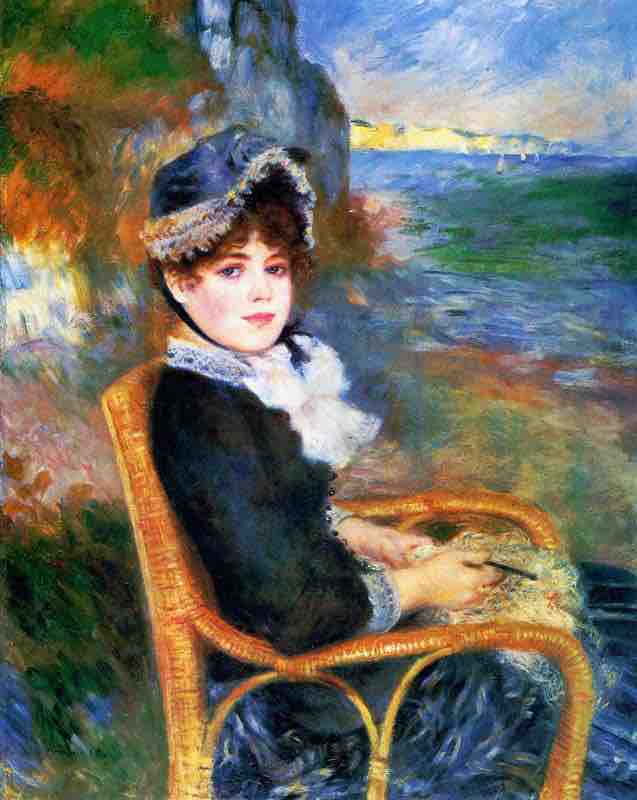 While in an 1885 portrait, Aline’s appearance is more matronly, perhaps reflecting her pregnancy with Pierre, their oldest child, who was born that same year. 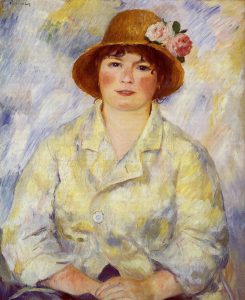 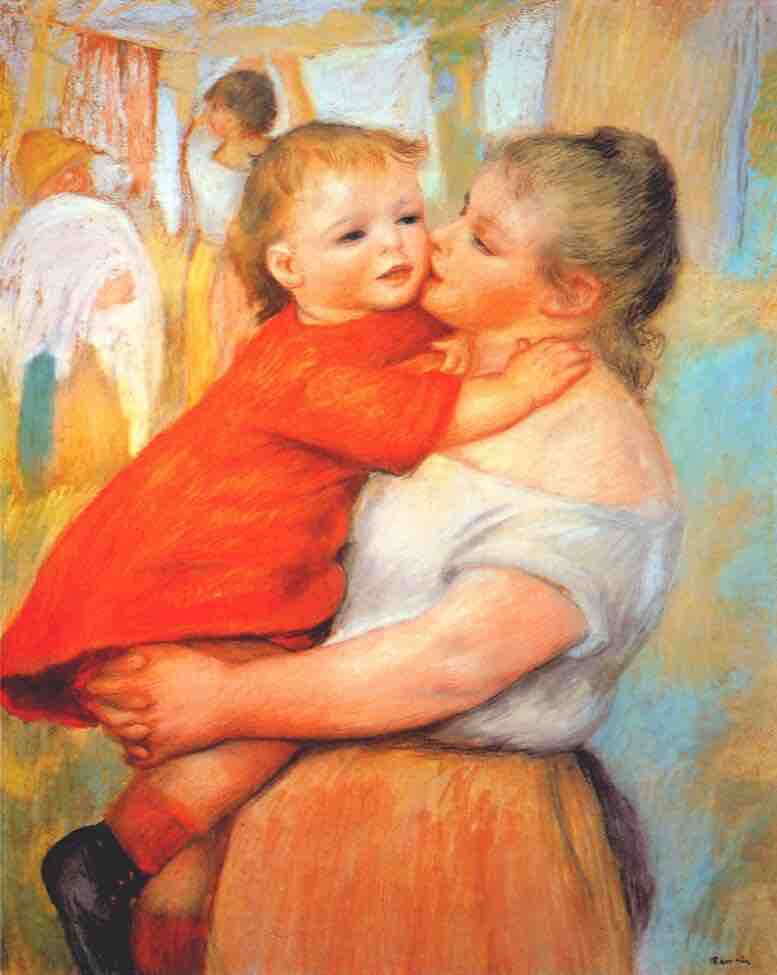 Aline appears less frequently by the 1890s, replaced by other models such as Gabrielle, the family governess who often posed, both alone or with the children.   In 1910, Aline does return in a one of Renoir’s last tributes to his beloved wife joined again (as decades before in The Luncheon of the Boating Party), by another favorite pet. 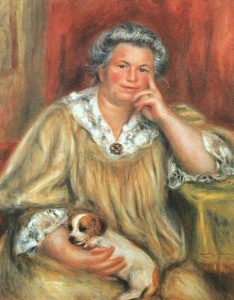 Both Aline and Renoir were residing by then in Cagnes, in the South of France, where they had moved because of his chronic rheumatoid arthritis.  In 1914, a photographer captured the poignancy of the couple’s relationship in which Aline protectively stands by her frail husband in his studio. 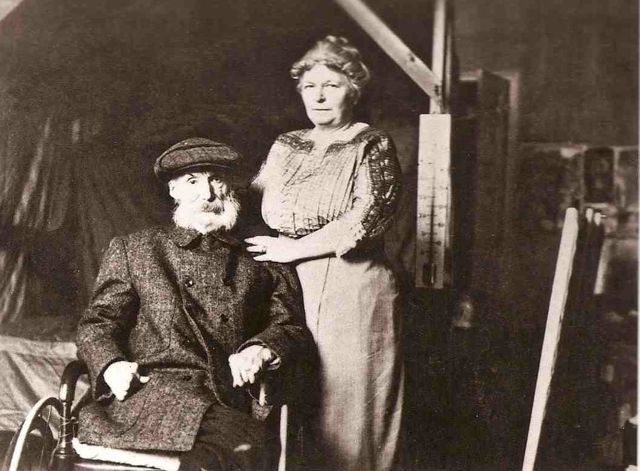 Yet, it would be Aline who would predecease Renoir.  For in 1915, shortly after visiting her son Jean who had been critically wounded in World War I, she would succumb to heart failure.  In his biography of his father, Renoir: My Father, Jean would later credit his mother with saving him from death, intervening when his leg was about to be amputated:

She opposed the operation with such energy that the military doctor at the hospital abandoned the idea.  He was replaced by Professor Laroyenne, a specialist, who cured the gangrene by using a curious system of circulating distilled water through my leg.  He did not conceal from my mother that I would not have survived the amputation.  As soon as my mother saw that I was out of danger, she went back to Cagnes and died.*

So, that ultimately the carefree Aline adoring her dog in The Luncheon of the Boating Party below, would die a heroine. 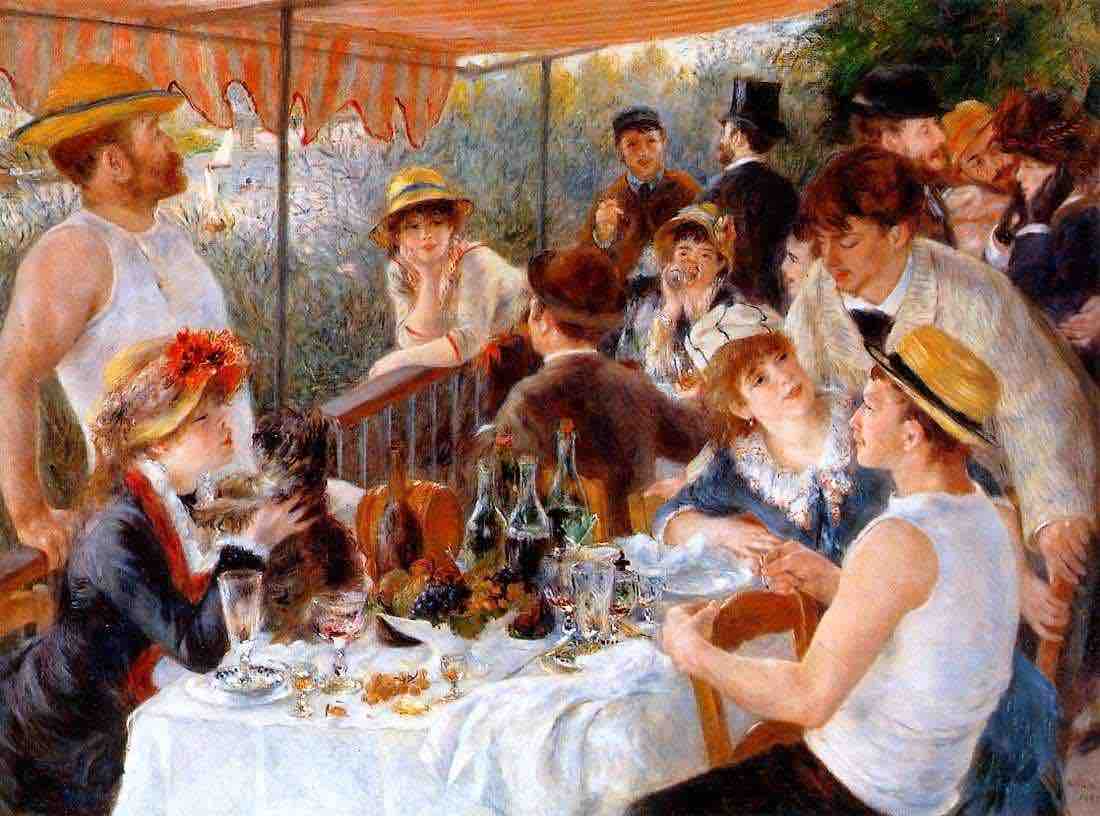 Pierre-Auguste Renoir, The Luncheon of the Boating Party, 1880-1881, oil on canvas, The Phillips Collection, Washington, D.C.

*Renoir, My Father by Jean Renoir, published by Little, Brown and Company, Boston, MA in 1962.

And discover the world of Renoir’s fellow Impressionist, Claude Monet and other artists in Through an Artist’s Eyes: Learning to Live Creatively.

The above paintings are presented solely for educational purposes.